The Patiala Necklace – the most spectacular piece of Platinum Jewellery

Eric Nussbaum, a Swiss born gemologist working with Cartier, stared in complete disbelief. He couldn’t believe what he was seeing. Like a palaeontologist who had stumbled upon a rare fossil of a once mighty dinosaur, he proceeded to inspect the skeletal remains with great detail. For these were no ordinary remains, but those of one of the most spectacular pieces of jewellery ever created. In an antique store in London, Eric Nussbaum found the platinum chains which formed the base for the fabled Patiala Necklace. Soon, the news of the discovery was all over the papers. The story of the Patiala necklace was back from the dusty pages of history into the limelight. 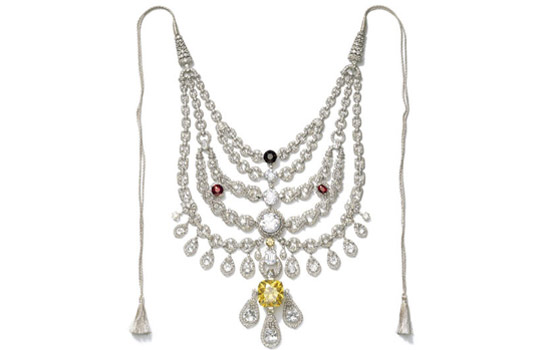 The Patiala State Necklace, created by Cartier for Maharaja Bhupinder Singh of Patiala. 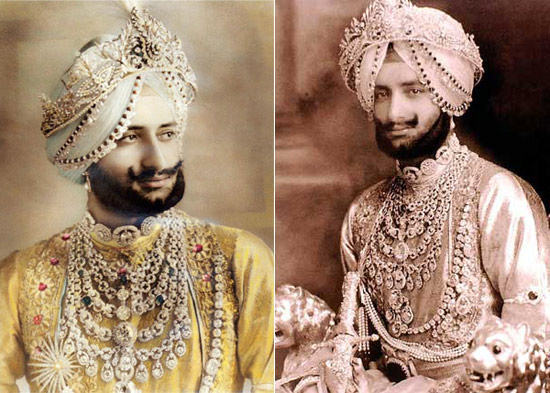 Maharaja Sir Bhupinder Singh, the magnificent ruler of Patiala was an avid collector of all things fine- cars, horses, watches, paintings. But his special passion was jewels. During the years of the Great Depression, his commissioning of jewellery sustained many European jewellers. In 1928, Maharaja Bhupinder Singh had arrived in Paris and commissioned Boucheron to design jewellery that would show off the fabulous treasure he had brought along with him: six trunks filled to the brim with pearls, emeralds and other precious stones. He placed an order for 149 pieces of jewellery!

Around the same time, the Maharaja also walked into the Cartier offices with the famous De Beers diamond and an abundant cache of diamonds and asked them to create a ceremonial state necklace for himself. The necklace was perhaps the most spectacular and most expensive piece of jewellery ever created and the largest single commission that Cartier has ever executed. It comprised of 2,930 diamonds weighing almost 1000 carats. Its centerpiece was the 234 carat De Beers Diamond, the 7th largest diamond in the world. It took Cartier almost three years to make the original necklace, which looked so exquisite that they sought the Maharaja’s permission to display it before sending it to India.

The Maharaja of Patiala wore this necklace on special occasions. However, post 1947, the state fell on hard times and stones from this necklace were dismantled and sold off separately. All that remained were the platinum chains in which this necklace was set. This too disappeared from Patiala, only to reappear in 1998, in a London antique store. It was purchased by Cartier and restored to its former glory. The necklace was displayed by Cartier across the world to rave reviews. The New York Times wrote gushingly “The crowds are lining up in front of Cartier on Fifth Avenue and 52nd Street, but they are not your average New York Christmas shoppers. They are passers-by staring, aghast, at a fabulous piece of antique jewellery. It’s not even for sale. Nor was it made to satisfy a beautiful woman. It is an ornament made to adorn the chest of a man”. A fitting tribute to the most spectacular piece of platinum jewellery ever created!

This entry was posted on Monday, February 20th, 2012 at 4:05:09 am and is filed under Precious Platinum. You can follow any responses to this entry through the RSS 2.0 feed. Both comments and pings are currently closed.