The Royal Wedding of William and Kate – Photos and Details

With an estimated 2 billion people watching around the world, Prince William of Wales married Catherine Middleton at the Westminster Abbey in London’s biggest royal wedding in three decades.

Kate Middleton managed to keep her wedding dress designer a secret till she walked the aisle in a gown designed by Sarah Burton of Alexander McQueen. Made from hand-cut English lace and French Chantilly lace in rose, thistle, daffodil and shamrock designs, the long sleeved lace and ivory satin dress was hand-made by the Royal School of Needlework at Hampton Court Palace. Kate wore matching shoes by Alexander McQueen.

While Kate did her own makeup, her longtime stylist James Pryce of the Richard Ward salon in London styled her hair in ‘Demi Chignon’—an updo style which combines a classic bridal look with a regal, couture finish. The look was finished with a 1936 tiara, borrowed from the queen, a Cartier vintage piece that was beautiful with her ivory tulle veil. Middleton wore earrings designed by Robinson Pelham, a gift from her parents. The bride’s bouquet was a shield-shaped wired bouquet of myrtle, lily-of-the-valley, sweet William and hyacinth. It was designed by Shane Connolly.

Prince William wore the uniform of colonel of the Irish Guards, as well as his Royal Air Force wings.

Kate Middleton changed into a strapless white satin gazar evening dress with a circle skirt and diamante embroidered detail round the waist by designer Sarah Burton for the evening party at Buckingham Palace following her wedding. 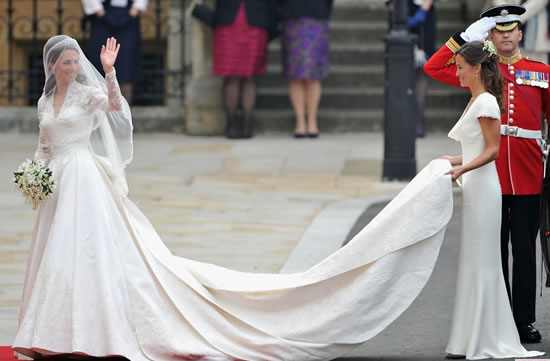 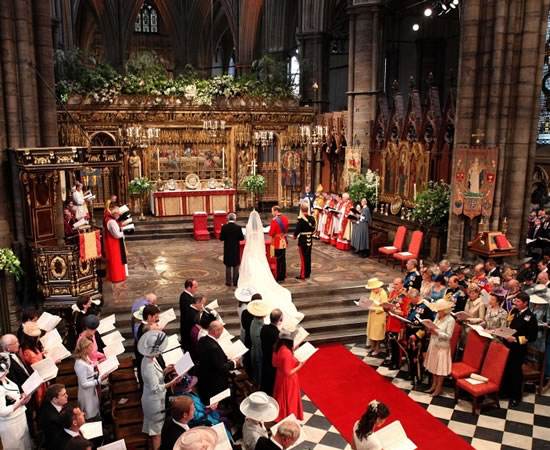 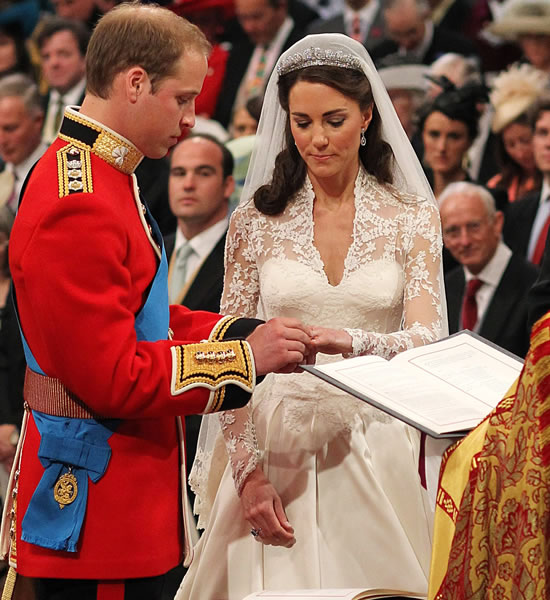 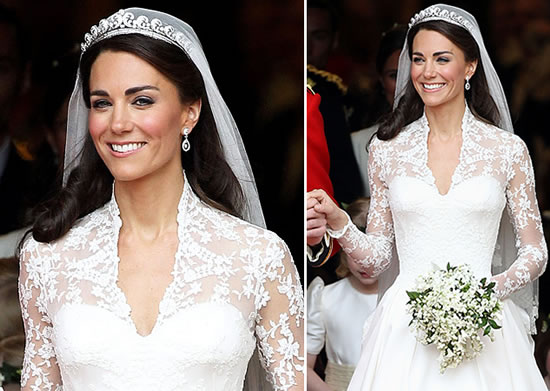 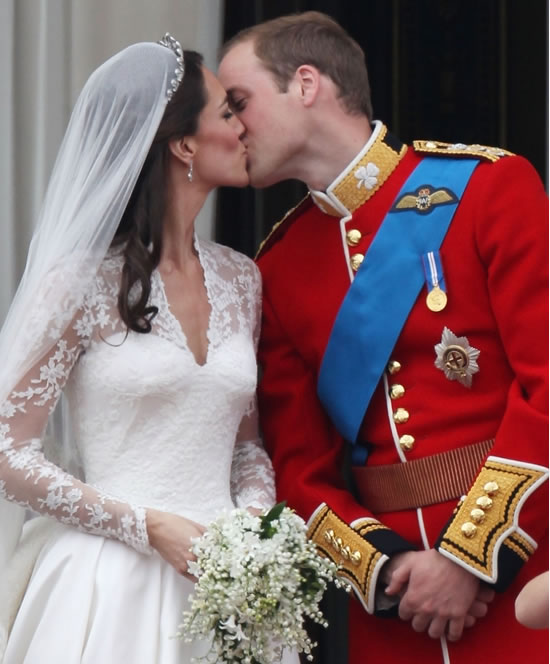 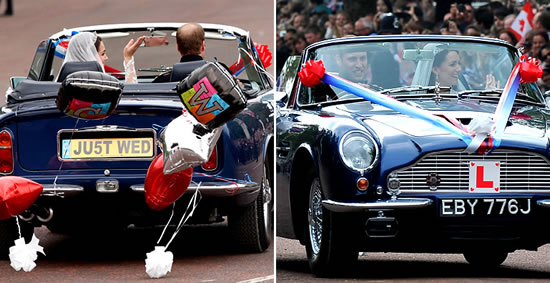 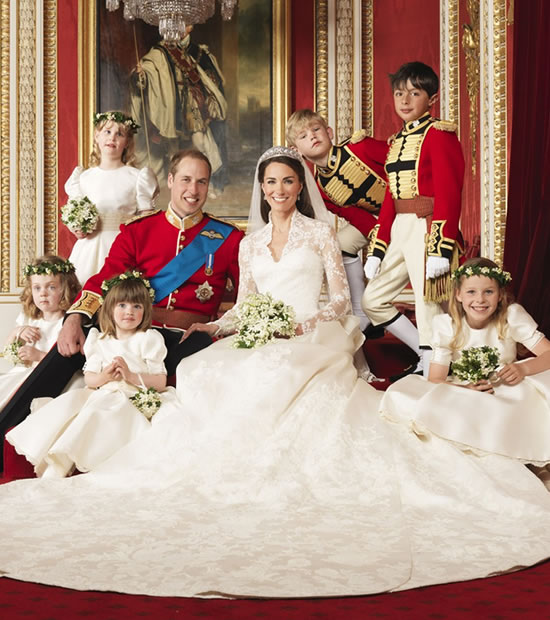 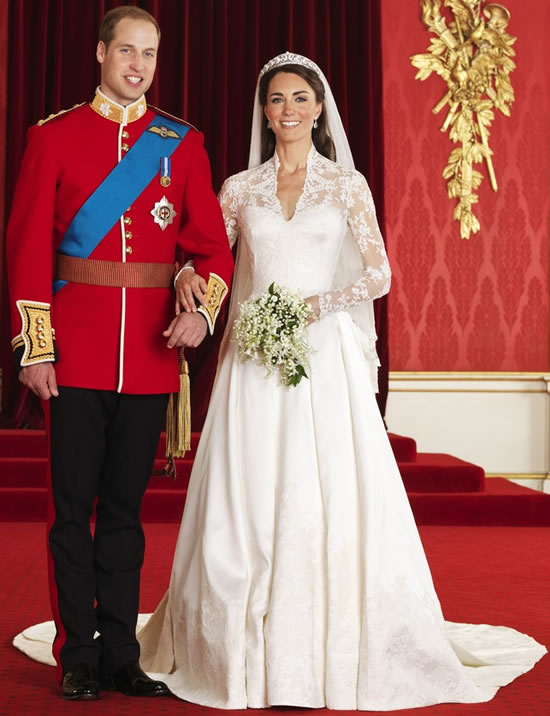 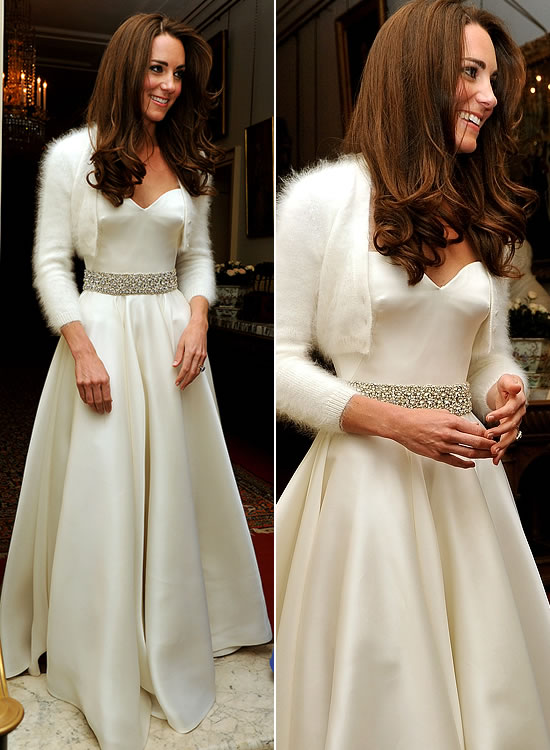 This entry was posted on Saturday, April 30th, 2011 at 11:54:18 pm and is filed under Celebrity News. You can follow any responses to this entry through the RSS 2.0 feed. Both comments and pings are currently closed.