This same sex wedding, officiated by the professor in whose class they met, will steal your heart!

While being in love is a wonderful feeling, being able to marry the person of your dreams, regardless of gender, race or community, is indeed surreal. Mekhala and Tatum’s wedding in the USA was one such affair and, though the wedding party was small, it was positively bursting with love! Here, the couple get candid about their sweet story and share some of the most cherished memories of their big day. 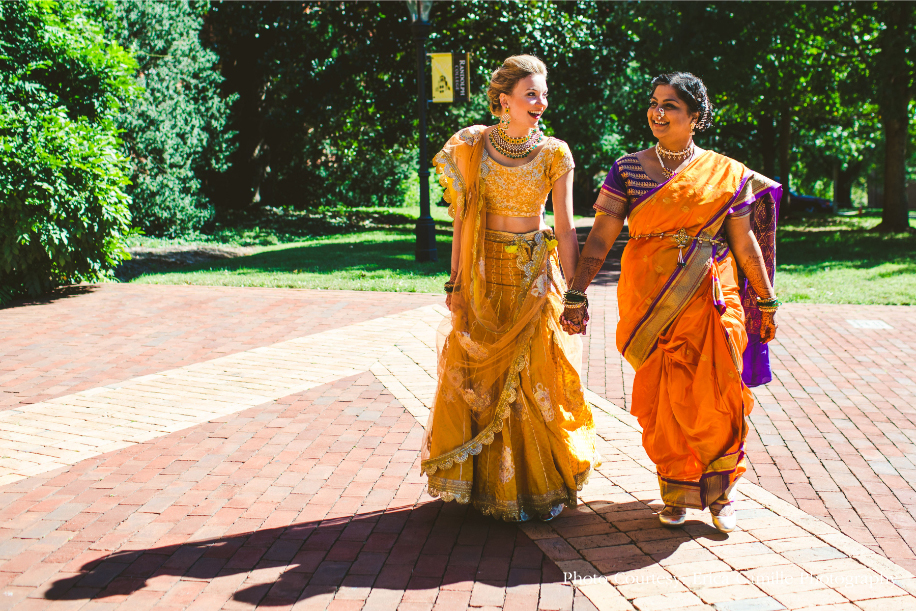 Their history goes back to when they met for the first time at a liberal arts college in Virginia. “Tatum and I were both majoring in creative writing and, over the course of three years, we became really good friends. However, it took us some time to realize we were in love. We were quite oblivious to it until after I had graduated!” says Mekhala.

Once the two realized that they were drawn to each other, they weren’t going to let go no matter the challenges. Tatum says, “We began seeing each other. I was still in the US and Mekhala was in Canada. Our long-distance relationship went on for four years and we would manage to meet every few months. It was very hard to not know when we would see each other next, and when we would finally be able to live in the same place.”

As time passed, their bond grew stronger and the day that they would unite for good finally arrived. Tatum says, “I was finally able to join Mekhala in Toronto, and we could not have been more thrilled about it.”

The next few years went by quickly and they soon reached a milestone in their relationship. Mekhala says, “It was the point at which we had spent the same amount of time living in the same city as we had spent living apart from one another. It was a beautiful summer evening when she arranged for champagne and, in the privacy of our home, she popped the question. This was the day we decided that we were going to live together longer than we had lived apart!” 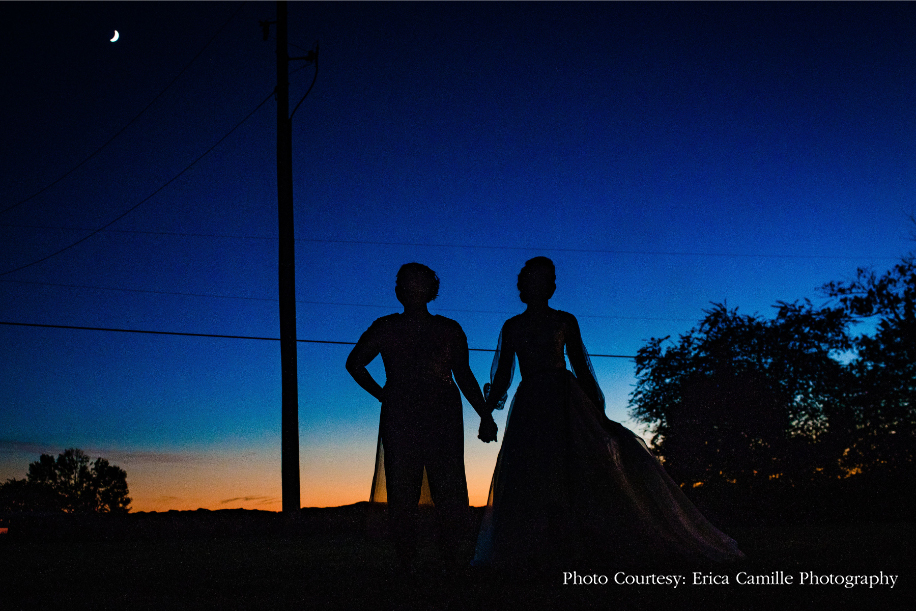 They planned to tie the knot on their tenth anniversary. Their nuptials were packed with beautiful moments and the couple was surrounded by love. However, they weren’t able to share their joy with all their nearest and dearest. “Acceptance of our relationship by our family was an evolving process and took time, patience and compromise. While they’re warming up to the concept, the process is still ongoing. Because of this, it was mostly one side of our immediate families who ultimately celebrated with us.”

Despite the challenges they faced, their wedding turned out to be spectacular as they put together a function that celebrated their unique cultural backgrounds, with nods to their personal history. “We were very keen on personalizing our big day as much as we could, so we decided to host it in Central Virginia, which is where we went to school,” says Mekhala.

They booked an estate in the Blue Ridge Mountains and finalized decor that was simple and elegant. “Our guests joined us for two distinct ceremonies. The first was the Hindu Maharashtrian wedding, for which we both wore Indian outfits. Mekhala dressed in a paithani saree that held deep significance to her. I opted for a beautiful yellow lehenga. This was followed by a Western ceremony, officiated by the writing professor in whose class we first met!”
Tatum adds, “The mandap was decorated with marigolds and included an image of the deity that Mekhala’s family worships. The altar for the Western ceremony, on the other hand, overlooked the mighty mountains. The decor and cake combined marigolds, which are a part of most Indian weddings, Texan wildflowers and birds of paradise, which is our mutual favorite.” 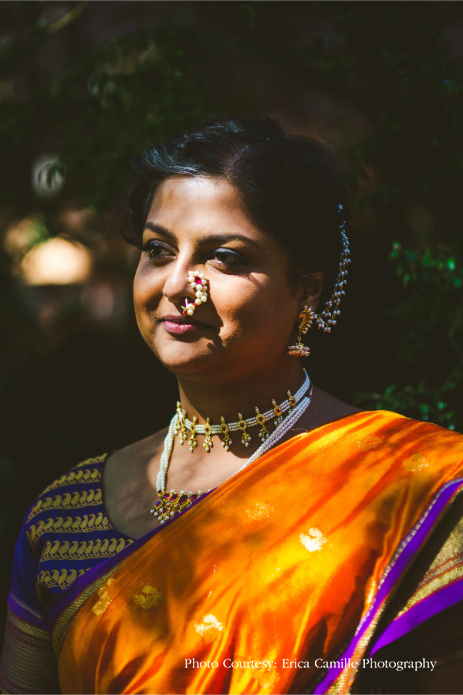 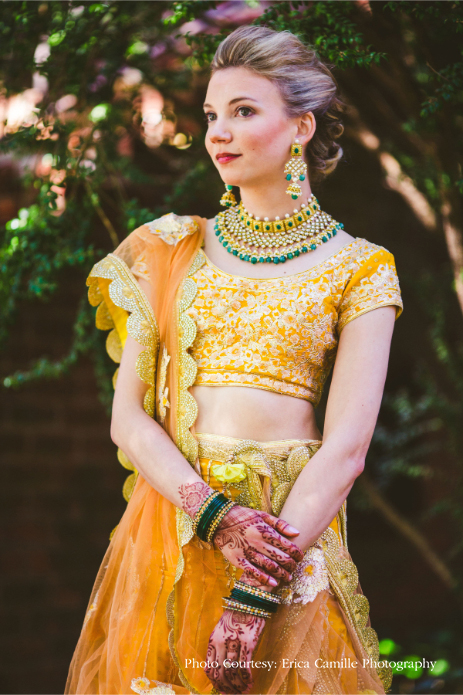 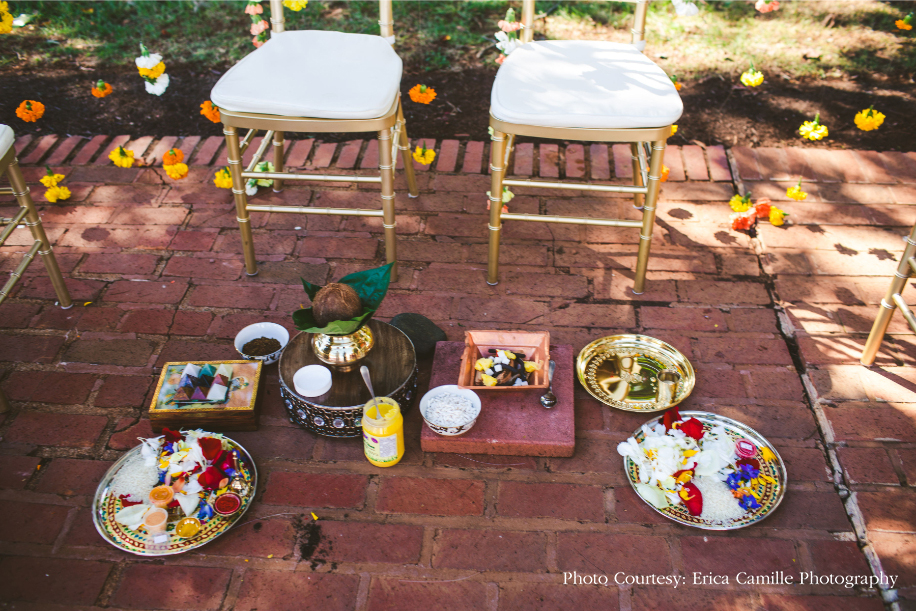 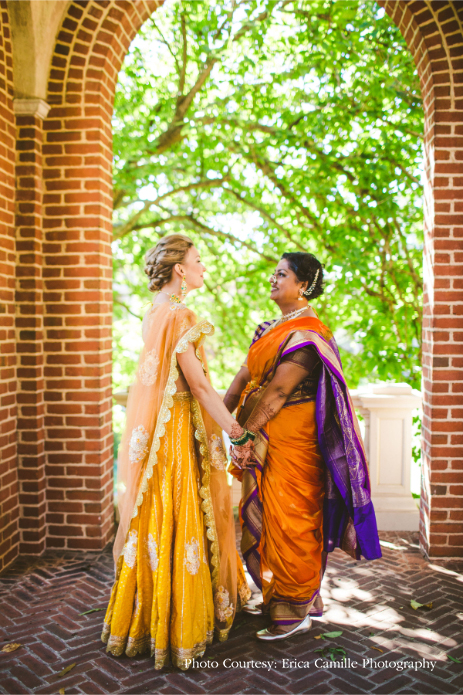 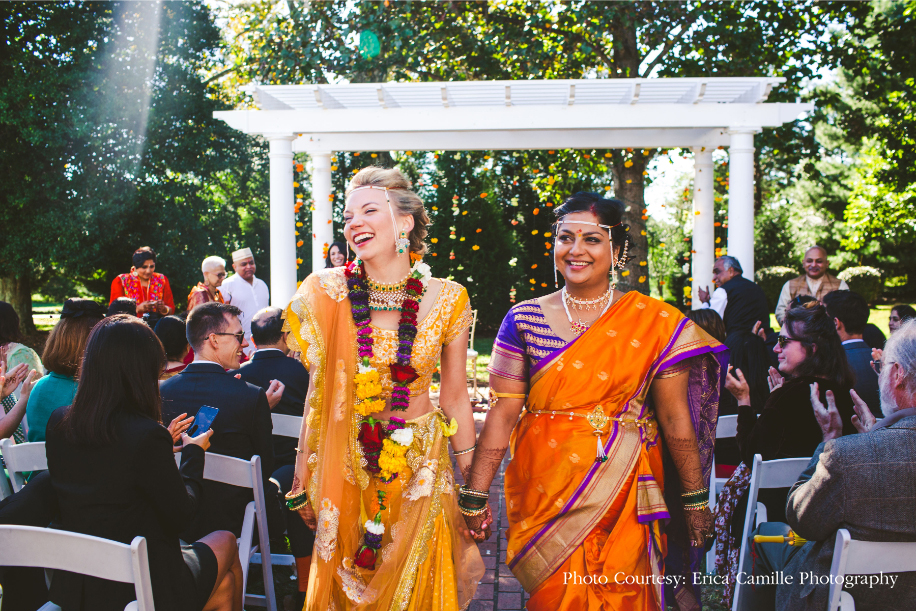 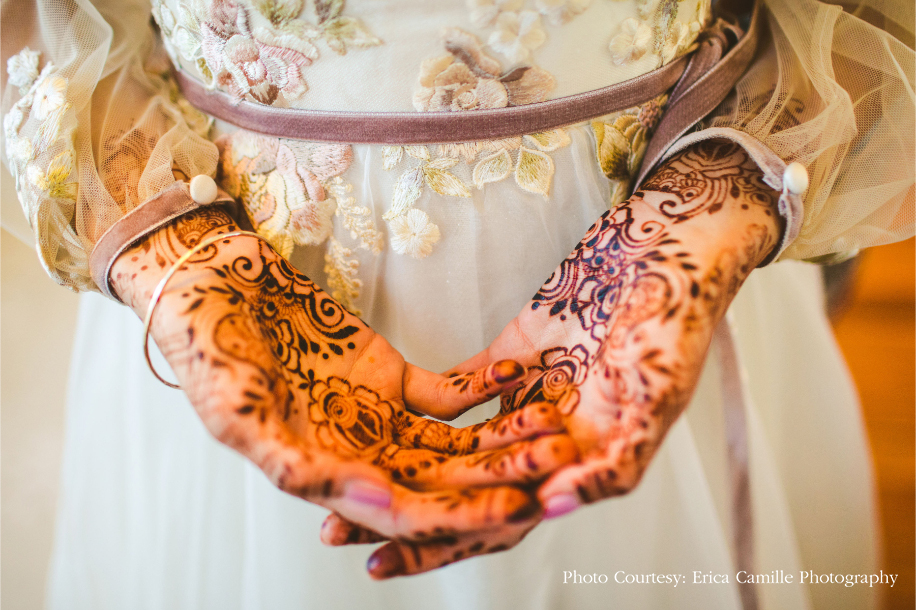 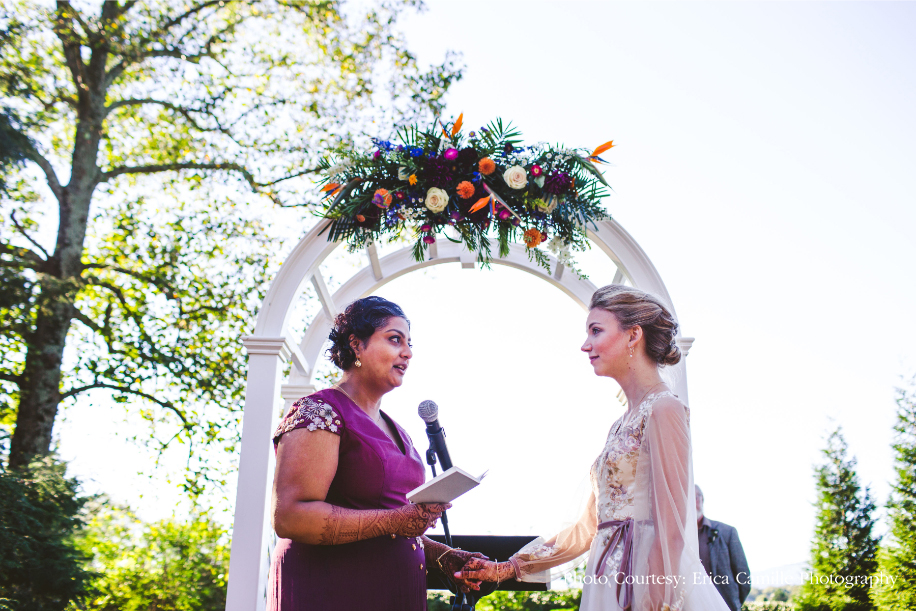 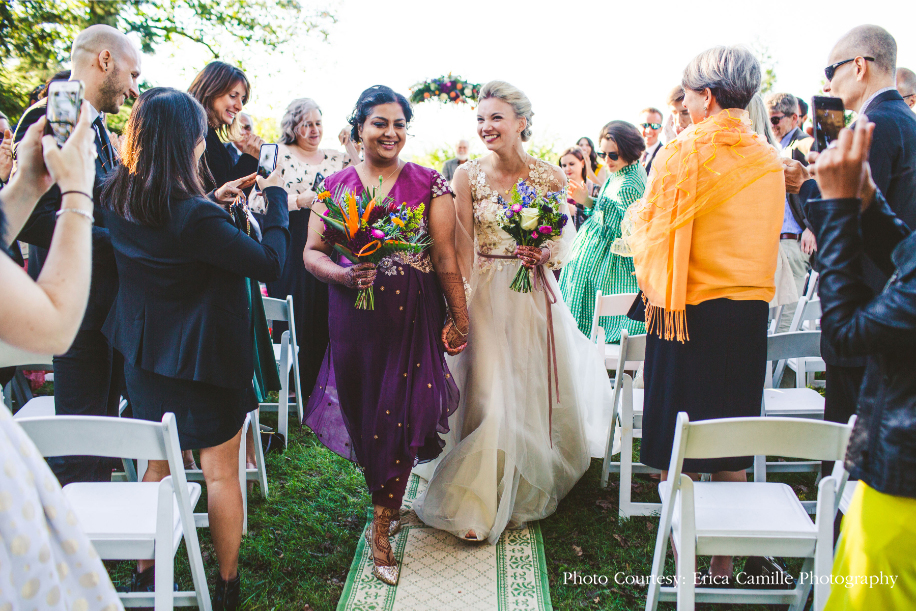 Instead of numbering their guest tables, the two decided to opt for a more creative, attractive and endearing alternative. “Tatum embroidered a different meaningful flower for each table using a special technique to honor her grandmother,” says Mekhala. “Although, she ran out of time and had one flower design pending. So, for the last table she got a photo of our cat instead!” 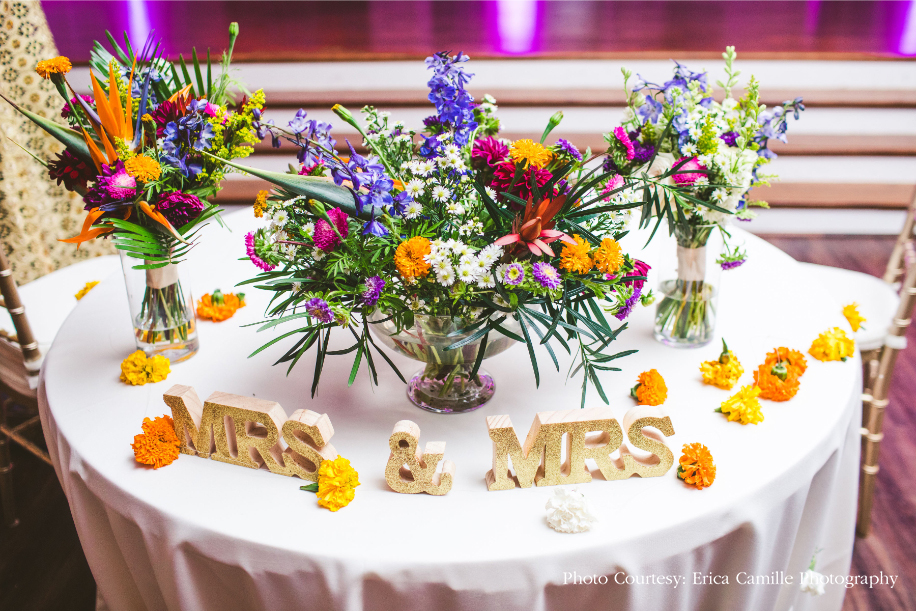 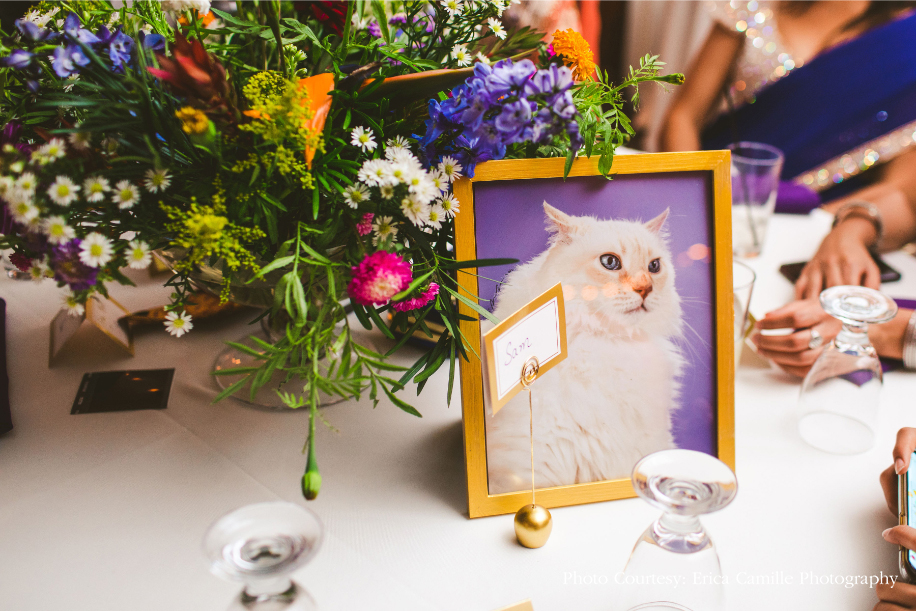 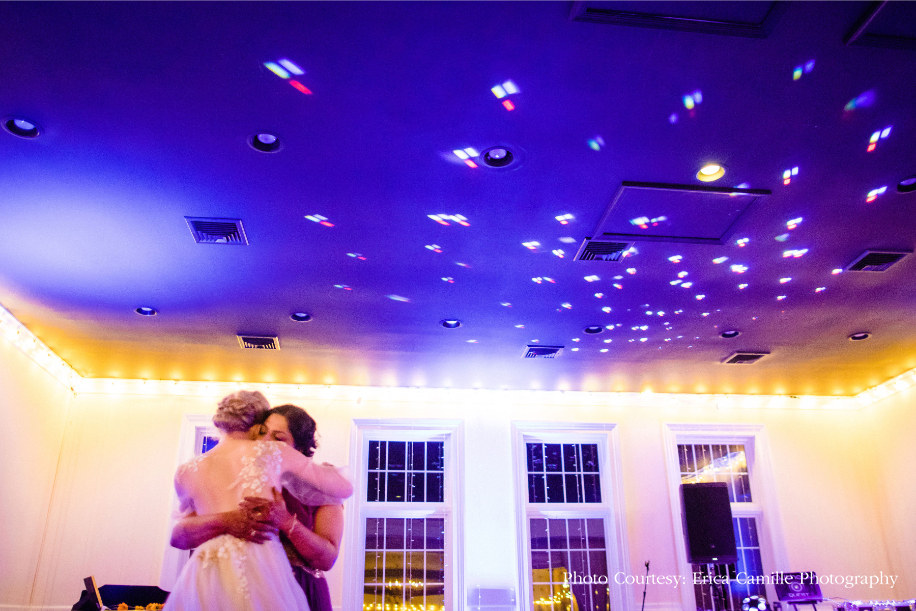 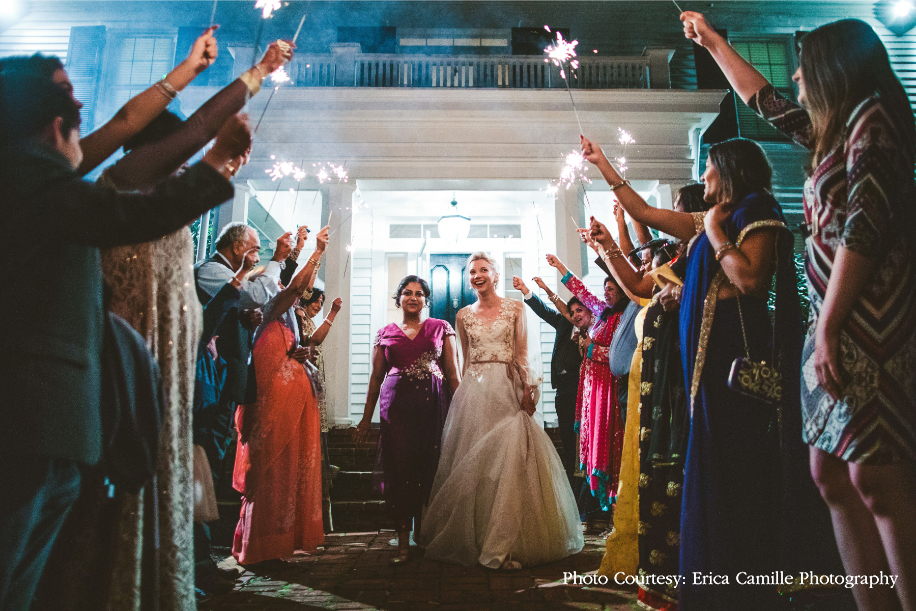 This entry was posted on Wednesday, July 3rd, 2019 at 10:50:31 am and is filed under Love without Borders. You can follow any responses to this entry through the RSS 2.0 feed. Both comments and pings are currently closed.