It all began when Apoorvi and Rohit’s company called on dance enthusiasts to audition for a performance. Apoorvi decided to take a chance and signed up – and she got luckier than she expected! At the practices, she began speaking with Rohit and it was from there that their love blossomed. Today, the couple is ready to tie the knot, preparing for their big day with a fun pre-wedding photoshoot by WeddingSutra Favorite – Akhan Photography. Having had a blast at the shoot, the bride talks about the whole experience.

How They Met
“The first time Rohit and I saw each other was in 2014. A marketing manager by profession, he was also a part of the dance club at Infosys. He and his teammates organized auditions for performances at an upcoming event. I decided to try out and his best friend pointed him in my direction. After that, he says he couldn’t take his eyes off me. I got selected but we were put in different groups. But he didn’t give up and would try to get involved by helping us with our choreography. He is a great dancer and I was very impressed with his moves. Soon I developed the biggest crush on him! We then went on a few trips together and became the best of friends, until we realized that there was certainly something more to our connection than just friendship!” The Proposal
“I grew up watching romantic movies and while I know real life can’t be that way, I always hoped for at least a chapter in my life to be a bit of a fairytale. To me, the photoshoot and proposal was just that. He went down on one knee on a snow-covered plateau, reciting lines from our favorite on-screen proposal. I was laughing and thought that it was so cute of him to give the photographers something heartfelt to capture. To my surprise, he then played a video filled with messages from all my close friends and family members asking me to say ‘yes’! He then took out a beautiful ring and asked me to marry him. Nature showered us with blessings as it snowed throughout, making the whole thing just dreamy!” 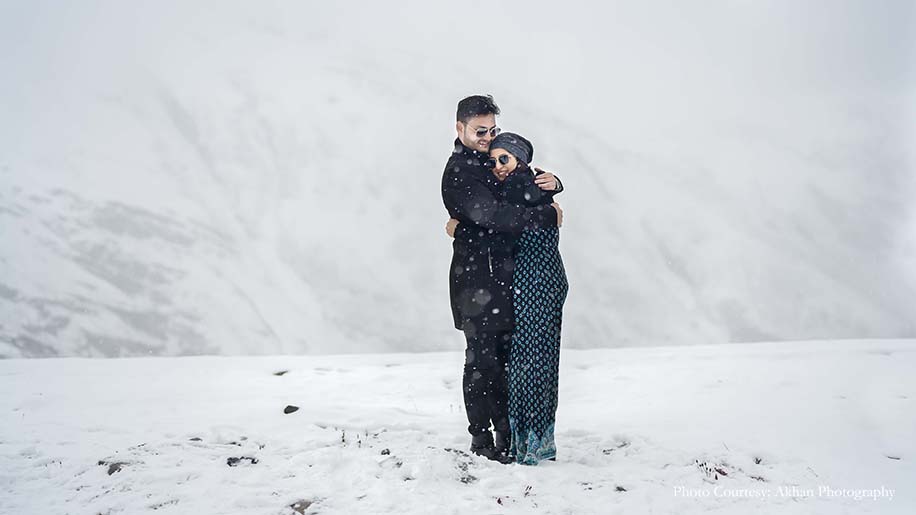 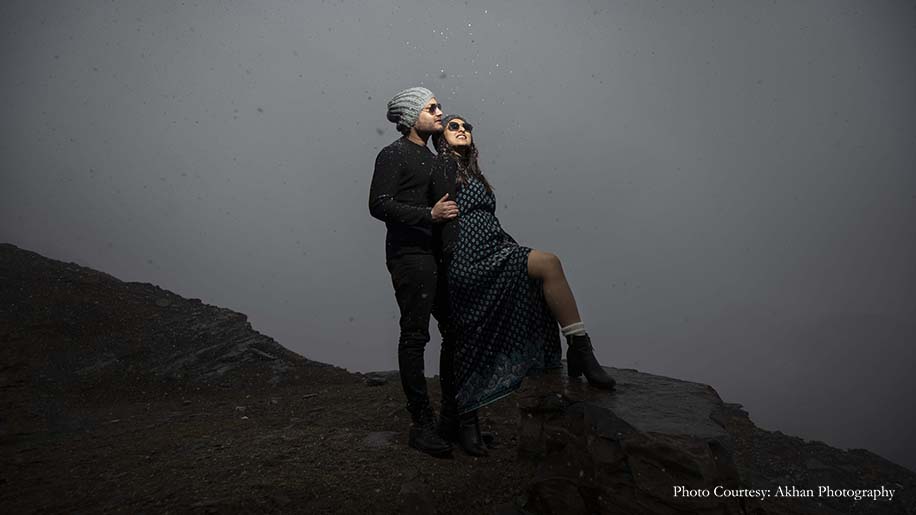 Pre-Wedding Photoshoot
“When Rohit and I decided to do a pre-wedding photoshoot, we didn’t have a clear picture of how or where we wanted it to be. The only thing we were certain about was that we were looking for pictures that weren’t conventional and reflected our real selves. We didn’t want to be Raj and Simran – just Rohit and Apoorvi!” 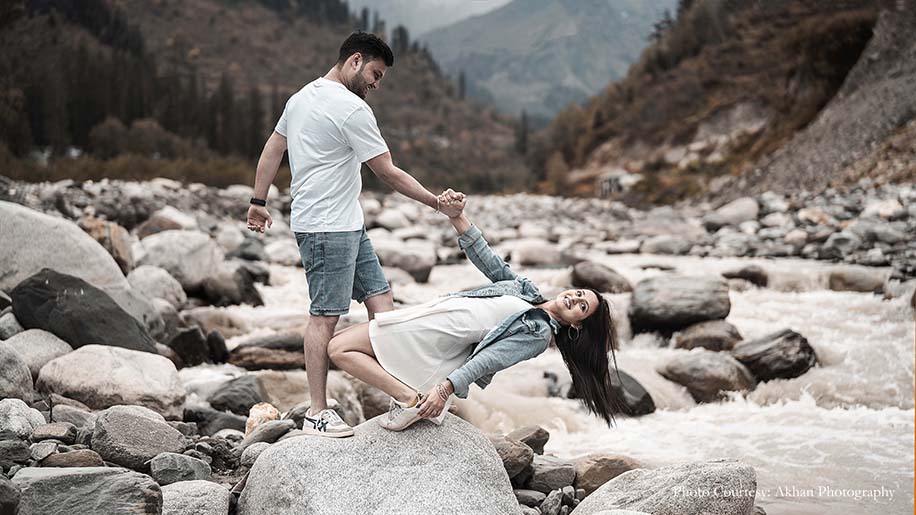 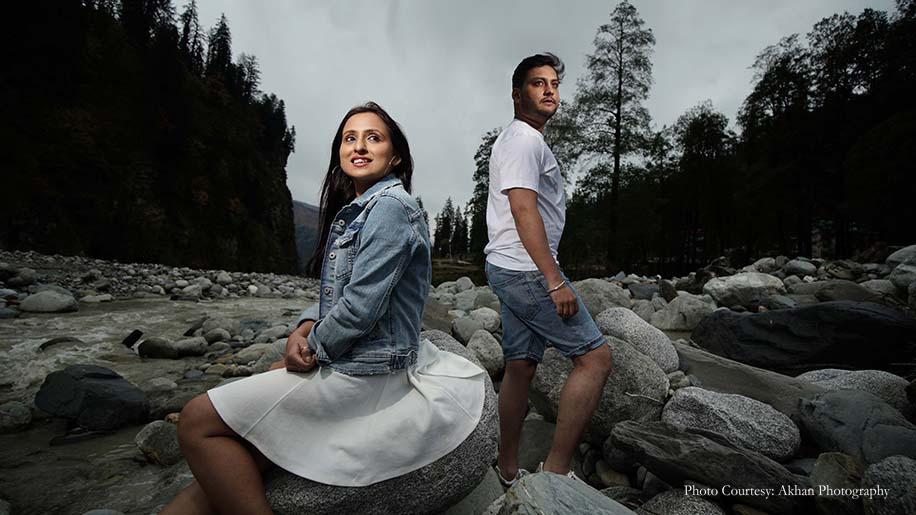 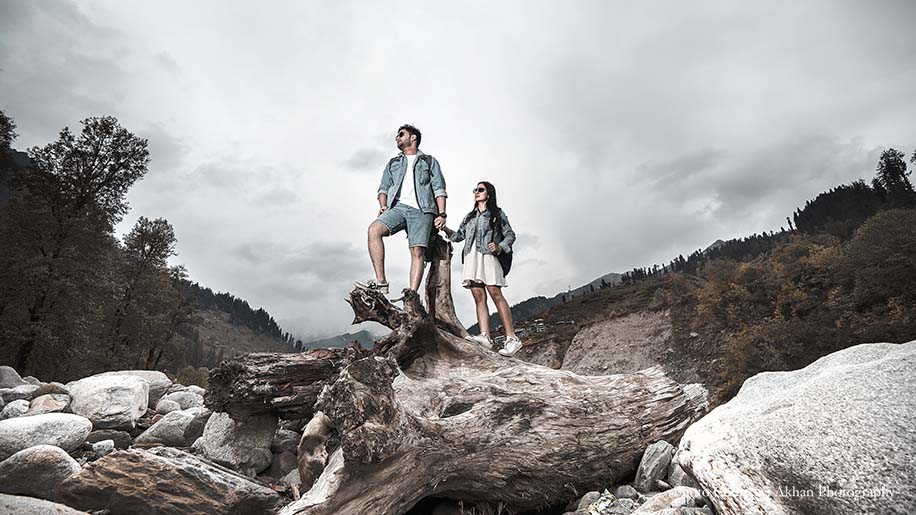 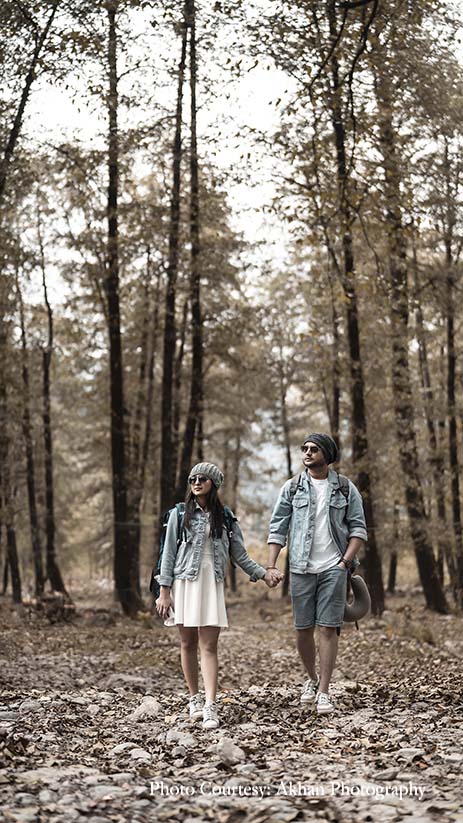 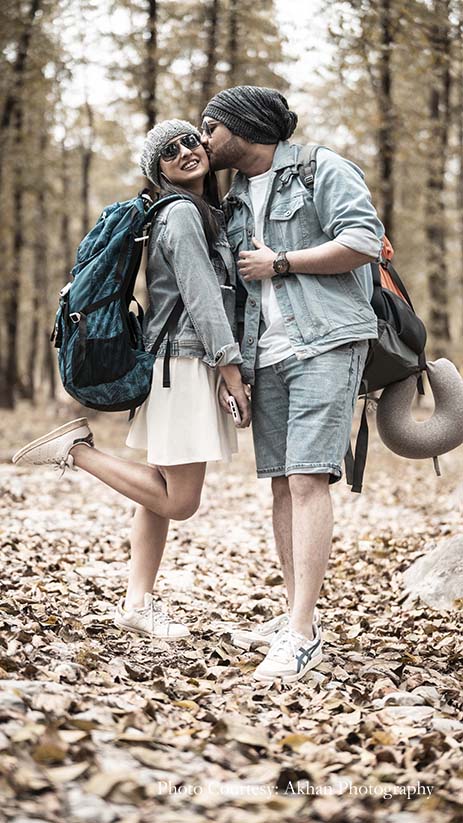 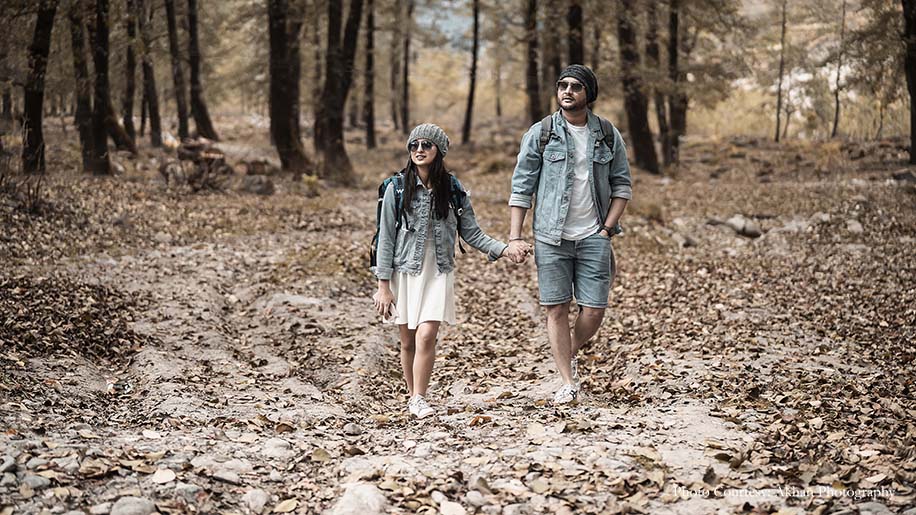 “We first chose Bhopal for the shoot. However, when Aqueel and Ashutosh from Akhan Photography heard about my love for the mountains they convinced us to change our location. ‘Travel’ was the theme and we loved the concept as it was what brought us closer during our two-year long-distance relationship. Also, we strongly believe that if two people need to test their compatibility, they should definitely vacation together.” “I always thought that pre-wedding photoshoots were all about picture-perfect poses, exquisite clothes and flawless makeup. But, working with Akhan Photography, I realized I was so wrong! This turned out to be more of a getaway than an orchestrated shoot. We took the time to relax before the wedding and had the entire journey documented!

Our looks were mostly casual but I did take one or two dramatic outfits because when on earth would I ever get the chance to wear a gown or a saree on a hill while it is snowing! Shooting with Aqueel Khan and his team was a breeze and, fortunately for us, the weather was on our side!” “Aqueel Khan brought the best of traditional and candid photography to the table and this was just what we were looking for. We were very happy that his level of excitement, enthusiasm and energy matched ours. He left no stone unturned to make the days of shooting just as fun as they were fruitful. His skills with the camera are unparalleled and even his unedited images had us stunned! We enjoyed ourselves thoroughly in all the mesmerizing settings – be it rivers, hills or landscapes blanketed in snow. Now we’re super excited to see how this proactive crew will capture our wedding day!”

This entry was posted on Tuesday, November 19th, 2019 at 12:28:19 pm and is filed under Pre Wedding Photoshoots. You can follow any responses to this entry through the RSS 2.0 feed. Both comments and pings are currently closed.