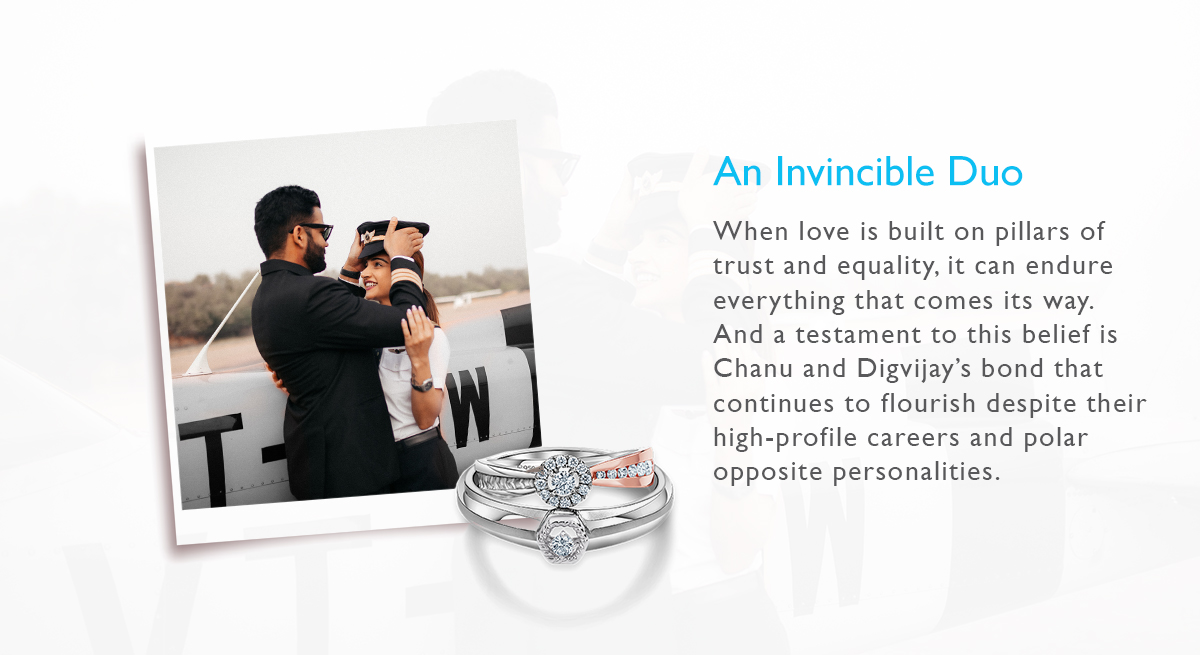 Pilots by profession, Chanu and Digvijay first crossed paths at flying school where sparks instantly flew. And even though Digvijay was sure that Chanu was ‘the one’, Chanu at the age of seventeen was focused on achieving her dreams of becoming a pilot. Chanu says, “Digvijay’s Dad was my flying instructor and Digvijay had come to my flying school to spend New Year’s Eve. And while for Digvijay, it was love at first sight, for me, love came around a bit slowly as we kept spending time together. However, I was taken aback when he proposed to me at the New Year’s Eve party. My answer was, of course, a firm ‘no’, given my age.” 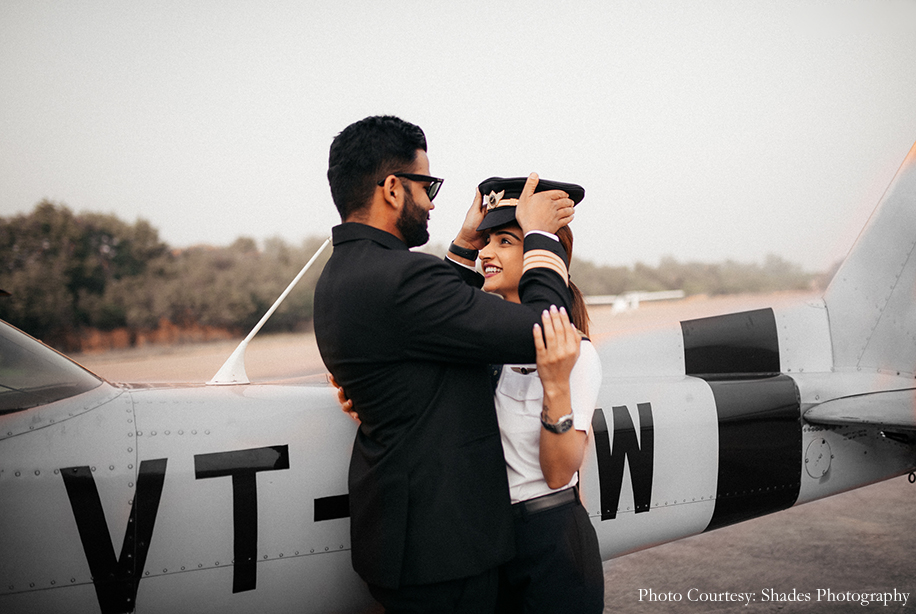 Being a pilot is no mean feat and in a union between two ambitious pilots like Chanu and Digvijay, equality plays a pivotal role in making sure their relationship thrives. Describing how they team up to inspire each other Chanu says, “Digvijay has supported my dreams from the very beginning. After I graduated from flying school, it took me four and a half years to find a job. During that phase, I’d lost faith in myself and questioned my decisions. But he never gave up on me and kept telling me ‘You should be up in the sky pursuing your dreams, Chanu. Don’t let anything get you down.’ And, to date, he continues to be my biggest motivator whenever I hit a hurdle.”

Digvijay, in turn, shares, “I started my aviation career after Chanu, and in fact, it was her love for flying that inspired me to change my career path. After getting an MBA degree, I switched careers many times. But witnessing Chanu’s passion for flying motivated me to realize my dream of becoming a pilot and spurred me to switch career paths again. The decision came with many daunting tests but she was with me through it all. She used her past experiences to help me study for my DGCA CPL tests and would in fact share her notes and insights with me.I think what works for us is that we understand the struggles of our profession and don’t shy away from giving each other a helping hand. As pilots, we have these extremely difficult tests twice a year and during these times we make sure to give each other complete moral support. Whether it’s exchanging notes on aircrafts or regulations or just being there for moral support, we both play an instrumental role in realizing each other’s love for this profession.”

A classic case of opposites attract, Chanu, an energetic perfectionist, and Digvijay, a steady and calm individual are constantly in pursuit of finding middle ground in their marriage. And, despite their differing personalities, the duo builds on their differences by communicating and mutually accepting their unique perspectives. Chanu says, “For me, he remains a source of calm who keeps me focused on the positive side of life. Being a perfectionist, I get worked up about the smallest of things, be it my flying tests or something as small as getting the AC at home repaired. In fact, in the last two years, we haven’t been able to celebrate our anniversaries due to back to back simulator sessions. I do get stressed about missing these experiences and the long list of pending household tasks that come with our hectic schedules but Digvijay calms me down and reassures me by saying, ‘It’s alright, Chanu. If not today, we’ll figure it out and find time for it some other day.’”

Over the two years that Chanu and Digvijay have been married, the ambitious couple has experienced their fair share of differences which stem from their hectic schedules and demanding careers. As pilots, they’ve often ended up in situations akin to long distance relationships because of the constant traveling; not to mention the exhaustion that accompanies it. But with ample amounts of patience, communication, and a shared sense of equality, they’ve struck a balance and in fact become each other’s source of motivation and strength. Sharing how they’ve supported each other throughout the ups and downs while juggling their ever-changing schedules, Chanu says, “For us, the first priority is always each other. The moment we come back from our respective flights, we make active efforts to spend time together. Digvijay works for Air India so his flights are usually lengthy international ones to countries like the USA and Canada, and by the time he comes home, he’s tired and jet-lagged. And since I work for Indigo, my flights are usually shorter be it international or domestic. On our off days, I’m usually all pumped up to socialize, go out for dinner, or if possible go on a vacation. But, knowing that he is usually more exhausted than me, I like to give him his space so that he finds the time to rejuvenate.”

Knowing that this can’t be easy on Chanu, Digvijay, admires the acceptance and respect for each other’s individuality that the two share, despite their many differences. “We’ve always made an effort to not pressurize each other. The journey hasn’t been perfect and yes, we’ve had our fair share of clashes when one of us wants to go out but the other is tired. But in time, we both have understood each other’s views. A quiet candlelit dinner at home, binge-watching movies, sharing cuppas at the local cafe, going window shopping or grocery shopping at the mall, sharing household chores are the small everyday things that make us happy together.” Chanu, chirpy as ever, giggles and adds, “We also love playing video games together, especially Call of Duty! So much so, that we coordinate to play it online with each other even when we’re apart due to work.” 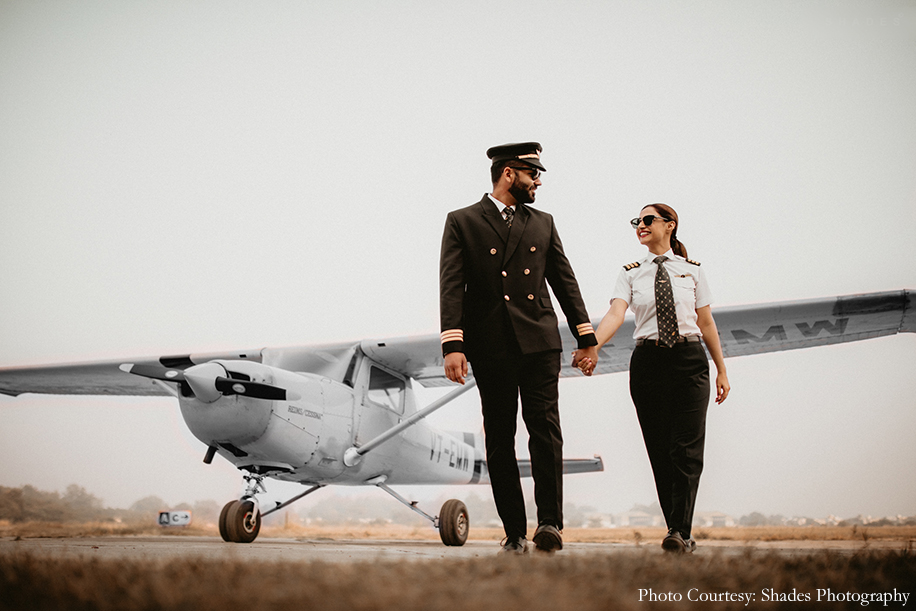 The previous year has been a tumultuous one, especially, for the aviation industry as the pandemic put a halt on traveling. But backed by their love for each other, Chanu and Digvijay powered through the uncertainty. Chanu shares, “The lockdown made us slow down and gave us the opportunity to spend more time together. We shared all the tasks around the house equally and indulged ourselves in movie marathons, set-up romantic date nights in our living room, experimented in the kitchen, and enjoyed long gaming sessions together.”

Chanu sums up their relationship by saying, “There’s an undeniable magnetic pull between us that keeps us together but at the same time doesn’t stop us from being independent individuals in our own right. Both of us, in time, have learned to give each other space and constantly communicated with each other to find a path midway where we both can unite.”

It takes a rare love to share a truly unconditional sense of equality – whether it’s about household chores, pursuing a career, or just letting their partner be themselves. And that’s what makes Chanu & Digvijay work so beautifully as a couple – it’s what’s allowed them to not just make it through a difficult time, but to thrive through it and come out stronger.

And for a love so rare, what better marker for it than a metal that’s just as rare? Chanu and Digvijay chose Platinum Love Bands to mark their rare love. Crafted in 95% pure platinum, never to fade, these rings promise to hold their shape through years of wear – the perfect embodiment of a love that stays strong through it all, of a love so rare.

This entry was posted on Friday, January 29th, 2021 at 4:33:43 pm and is filed under Precious Platinum. You can follow any responses to this entry through the RSS 2.0 feed. Both comments and pings are currently closed.