The cityscapes of Bangkok in Thailand were lit with action from Pankaj and Darshana’s post-wedding shoot. Pankaj shares how he tricked his bride into packing clothes for the stunning shoot, and why the time and effort he took to plan everything was worth it. 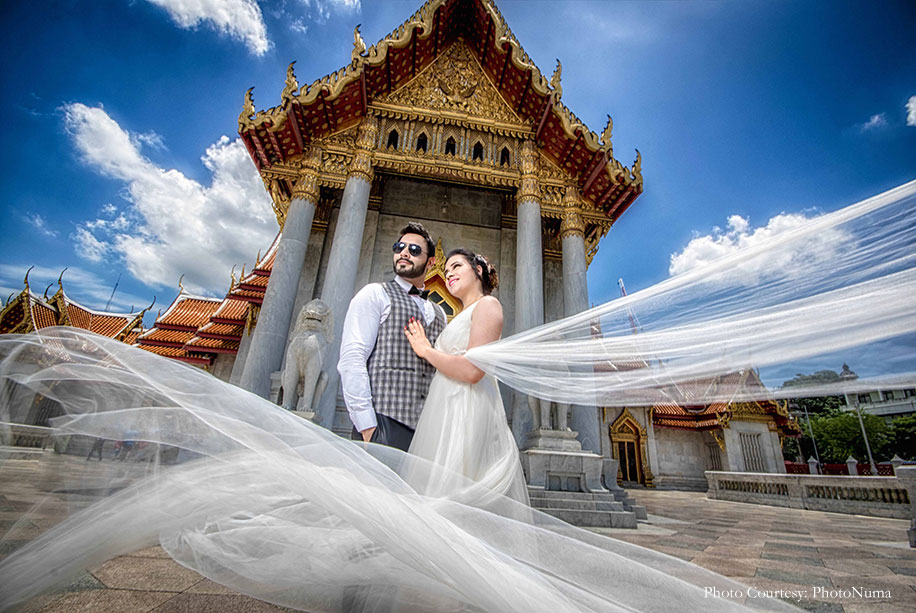 It all began when Darshana’s mother showed interest in Pankaj as a future son-in-law on a matrimonial website. Pankaj shares, “I wasn’t a regular on the portal so by the time I saw the update from Darshana, she had already deleted her account. I really wanted to connect with her so I dropped her a message on Facebook followed by a ‘friend request’.” The ‘friend request’ led to message exchanges, birthday wishes and consequently, a date “When we finally decided to meet, our ‘casual’ coffee break turned into a date that went on for over four hours.” After a series of meetings where Cupid successfully played his role, the couple decided to get married. The #DarPan wedding had it all – from traditional Sindhi rituals to exotic carnival dancers. However, the most important elements were the surprises that Pankaj had planned. “Our wedding caricature invitation cards, the artist performances at our wedding, our honeymoon, and in fact, even our post-wedding photoshoot were all surprises for Darshana. Yes, these things do take a lot of effort to plan, but her priceless reactions every time made all the hard work worth it.”

For their post-wedding shoot, Pankaj whisked his new bride to Thailand’s capital, Bangkok. After all, when you are looking to capture happy frames, what would be a better place than the land of smiles!
As an event planner who had orchestrated several weddings in the city, Pankaj was well versed with the locales and knew exactly where he wanted the pictures to be shot.

“I chose three iconic locations in Bangkok which included the party district of Khaosan Road, the famous Sathorn Bridge that is flanked by towering buildings on both sides, and the beautiful Wat Benchamabophit Temple. In recent years, street art culture in Bangkok has come to the forefront to become an integral part of the city’s walls and urban scenery. We shot a series of pictures against a wall of street art where we replaced our fairytale looks with modern ones,” recalls Pankaj. 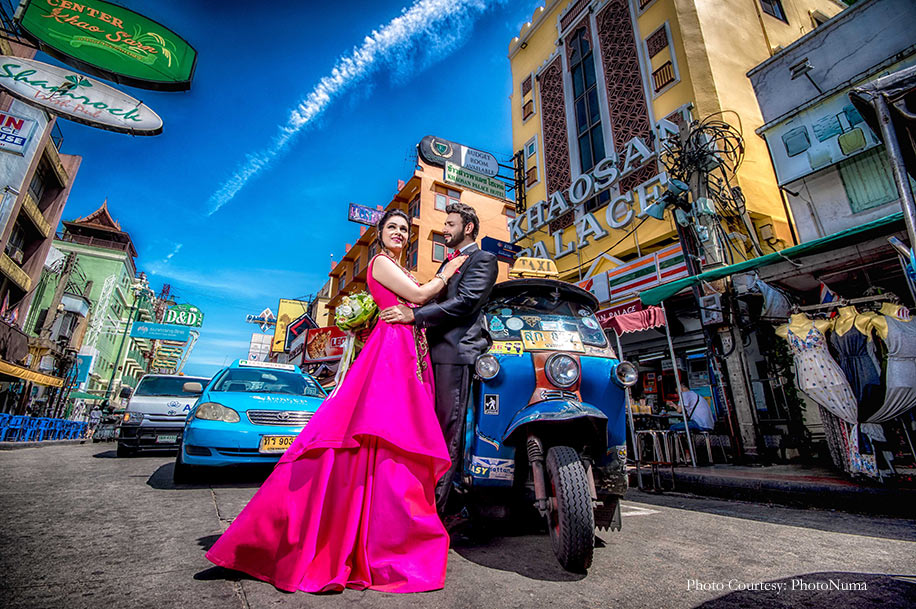 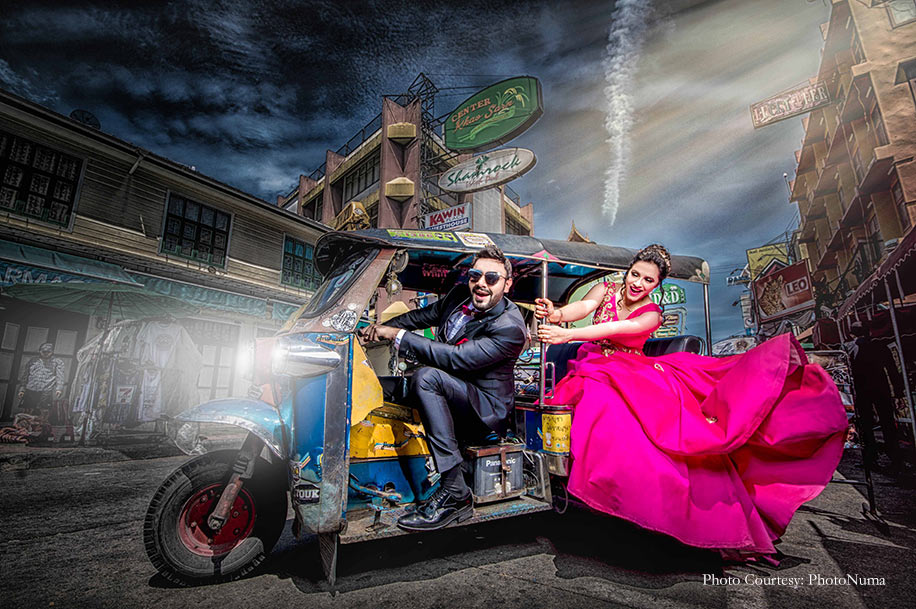 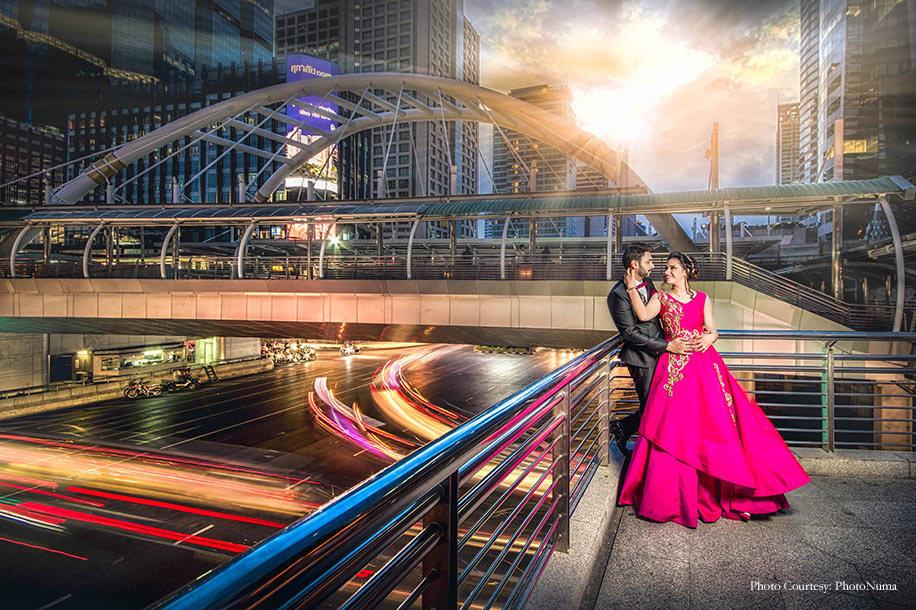 Pankaj’s attention to detail included hair and makeup even for himself, as guys typically don’t pay attention to these details. “Our hair and makeup for the shoot was taken care of by Mrs. Dilraj Arrora, who is one of the leading Indian makeup artists based in Bangkok.”

While all the backend work went smoothly without Darshana getting even the slightest hint of what Pankaj was planning for her, the challenge came when Pankaj had to get her to pack the right clothes. “At first I felt like stealing all her clothes and keeping it in my bag! After some thinking I came up with a trick. We, along with our families, were going to go to Goa after our reception as part of the post-wedding celebrations. A few hours before we left, I told Darshana that it would be a good idea to pack some pretty clothes just in case we found a good photographer there who could click some photos of us. She agreed, and I got all I needed for our post-wedding shoot,” explains the enterprising groom. 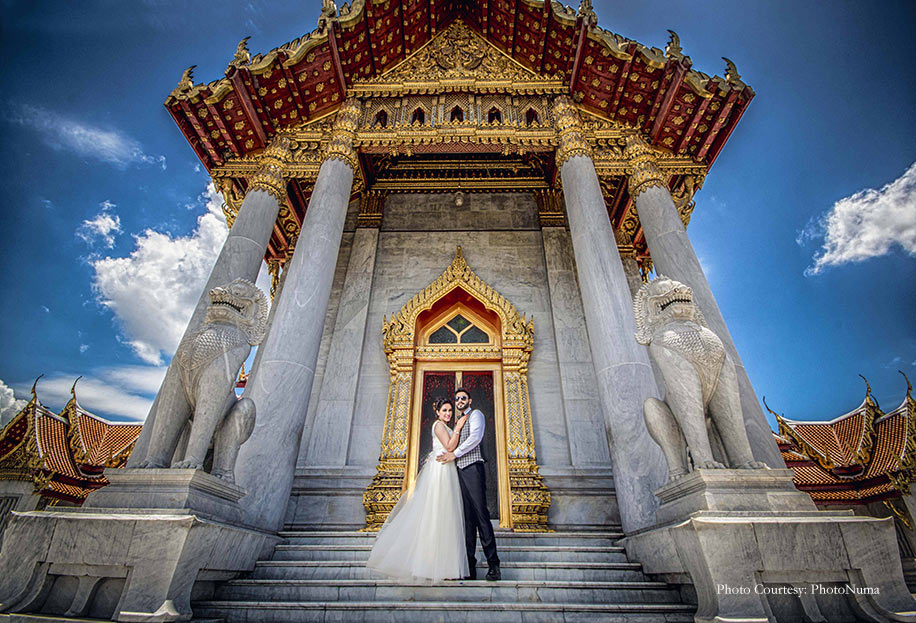 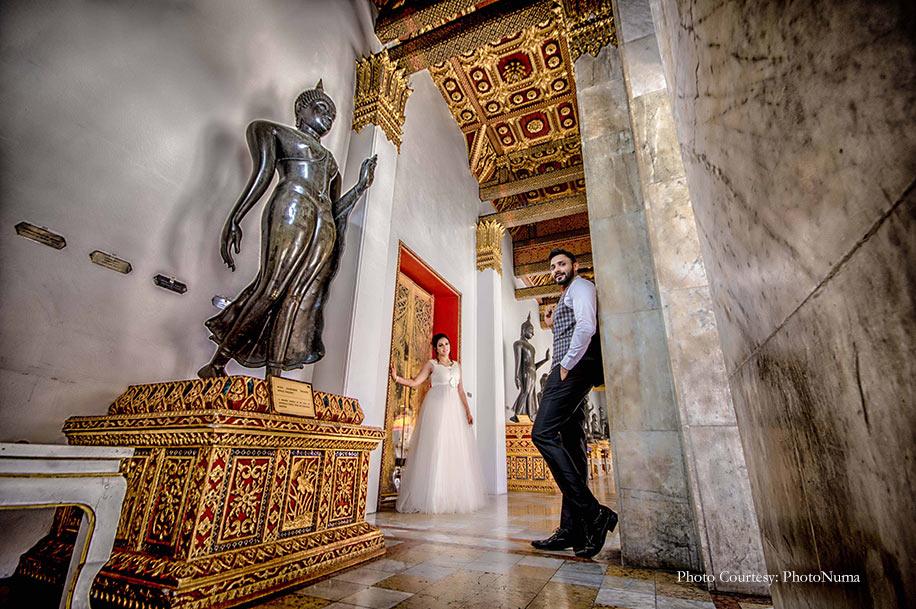 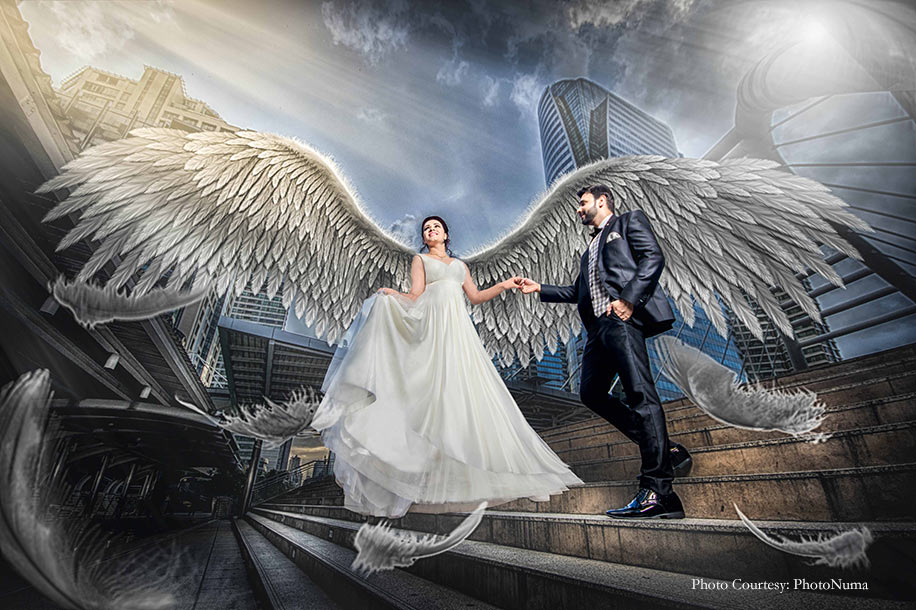 That, however, wasn’t the only obstacle Pankaj was anticipating. Usually, Bangkok experiences monsoon in the month of July, and the skies there are usually overcast for days without a hint of the sun. Nevertheless, when the couple spent an entire day shooting without having to face any showers, it felt like the stars had aligned only for the duo. “Our shoot took 14 hours, and we changed our looks several times. Since there was no time to go back to the hotel for every change, Nant carried a portable tent for us. So we were practically changing our clothes on the roads! Everything would have been jeopardized if it would have started raining. However, the rain gods were kind and held their patience until we finished our shoot. The minute Nant took the last shot, it started pouring and we all got drenched from head to toe. It was definitely the most memorable day of our lives! A lot of work went behind this one day, but the results were fantastic. Of course, the credit goes to Nant who captured the chemistry between Darshana and me so well, and Dilraj who made us look like movie stars!”

Advice for Couples
“If you are planning to do a photoshoot in Bangkok, it’s important to choose a photographer who speaks English. A language barrier can cause a lot of issues. Also, choose your locations well in advance as you may need to take permissions to shoot at some places which can be time-consuming as well as costly.”

This entry was posted on Monday, August 21st, 2017 at 12:11:26 pm and is filed under Pre Wedding Photoshoots, Wedding Photography & Films. You can follow any responses to this entry through the RSS 2.0 feed. Both comments and pings are currently closed.