Our initiative ‘Love Actually‘ features engaged couples and captures beautiful moments between them. The series celebrates people in love as they start their lives together. Over a fabulous makeover and a photo shoot, we get these couples to tell us how they met, capture the rare connection they share and talk about their day of love.

Madhushree and Kiran, a down to earth couple who find pleasure in nature, nurtured a love so precious and rare that it only compares to the qualities of platinum. They spent a day doing what they love most – being with each other and planting seeds that are sure to flourish just like their love. Team Knotty Affair by Namit & Vipul captured their romance in splendid frames. 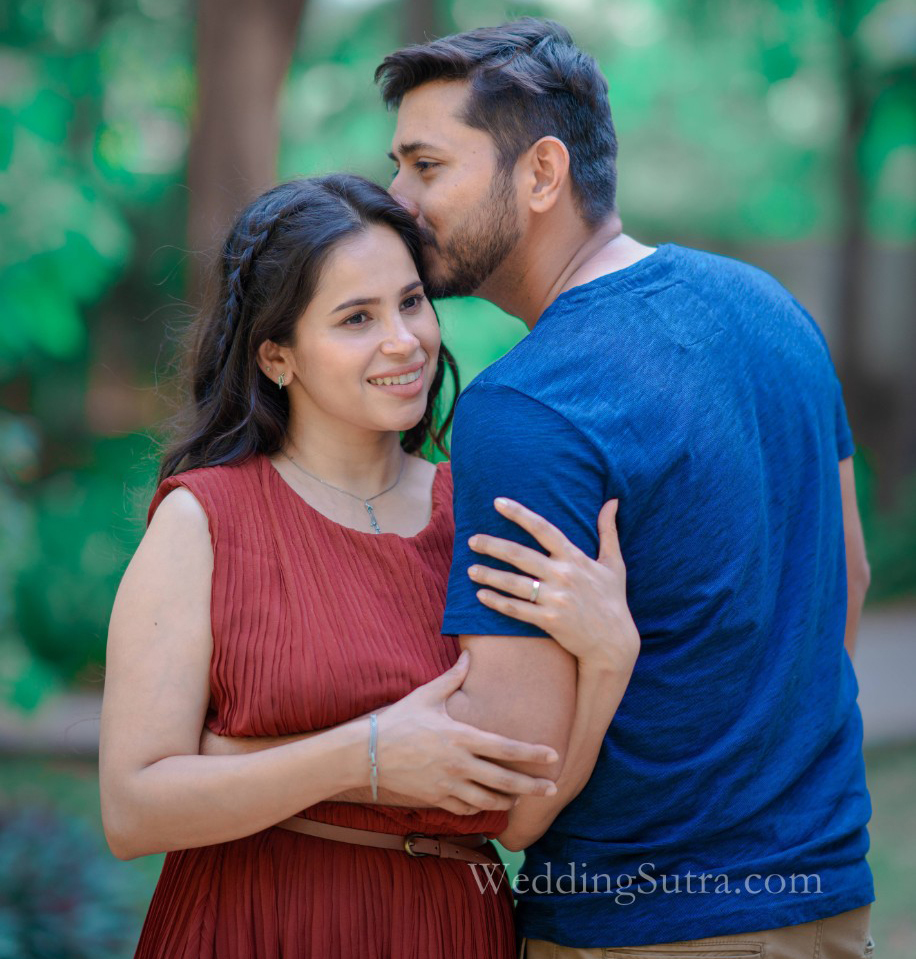 It was Madhushree’s sister-in-law, Aruna’s idea to introduce him and Madhushree to each other. She knew that the two were perfect for each other. Madhushree, however, needed more convincing. She says, “I had just returned from London and was looking forward to building a future in Mumbai. A serious relationship was not my priority. It took a lot of coaxing before I even spoke to him.” But Aruna was right. Not only was Madhushree relieved to know that Kiran was as focused on his career goals as she was on hers, he wasn’t looking for a life partner than either. They kept in touch and over the years, a relationship began to thrive.

While ‘being there for each other’ is something people in love talk about, in this couple’s case, their bond grew strong when Kiran managed to be there, even long distance. Just relocated to Gujarat on work, Madhushree found herself in a new city, Ahmedabad, in a huge apartment, all alone as the city was wracked with a violent thunderstorm. She says, “I was quite scared. Kiran and I happened to connect over Skype and he stayed up the whole night talking to me and keeping me company so that I felt safe. It was such a thoughtful thing for him to do and one of the many ways he has made me feel valued and cared for.”

It’s something Madhushree realised, was part of Kiran’s nature. “We’d been talking but lived in different countries so we planned to make a trip to Goa together. I was to meet him at the airport but I was exhausted and fell asleep while waiting for him there. When he arrived, instead of waking me up, he patiently sat next to me and waited for me to awaken.”

The pure, easy, non-showy aspect of their love was most evident in his proposal. Madhushree says, “When he proposed, everything happened so simply, so easily. We’d returned from our holiday and it was time for him to head back to Singapore. We were having coffee and he just asked me to marry him. I said yes. And that was it. There was no going down on one knee or any fanfare. Just a simple moment of togetherness.”

It’s a series of instances like this that has Madhushree firmly believe that platinum represents their love. “There is nothing we do for each other that is flashy,” she says, “It’s just a silent understanding that we’re always going to be by each other’s side. Quiet acts to make things better for each other. It is more valuable than anything else we have and so if there is anything we can compare our bond to, it is platinum. Despite being the most precious metal used for crafting jewellery, it is so subtle.”

With this resonance in mind, she and Kiran plan to commemorate their love with Platinum love bands. “We began talking when we were in two different countries and that didn’t change through the five years of our relationship. Our bond managed to grow despite the distance, which is so rare to happen. Thus we find that Platinum love bands the perfect symbolic expression of our connection and we are definitely going to get them,” she says. In the dappled sunlight, the couple began a walk in the woods. 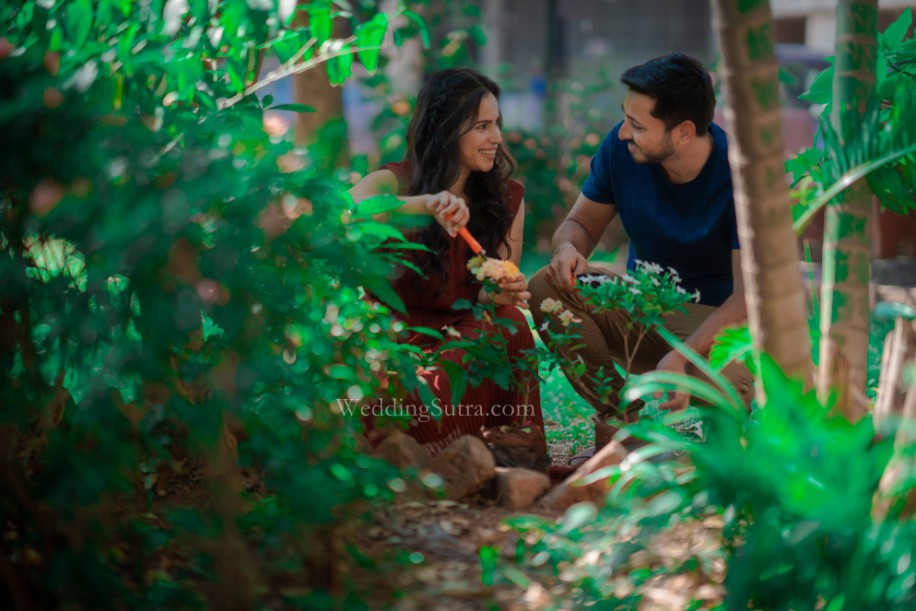 Madhushree: We water the roots, trim the leaves and wait for the fruit. Kiran: And we also sow something new! 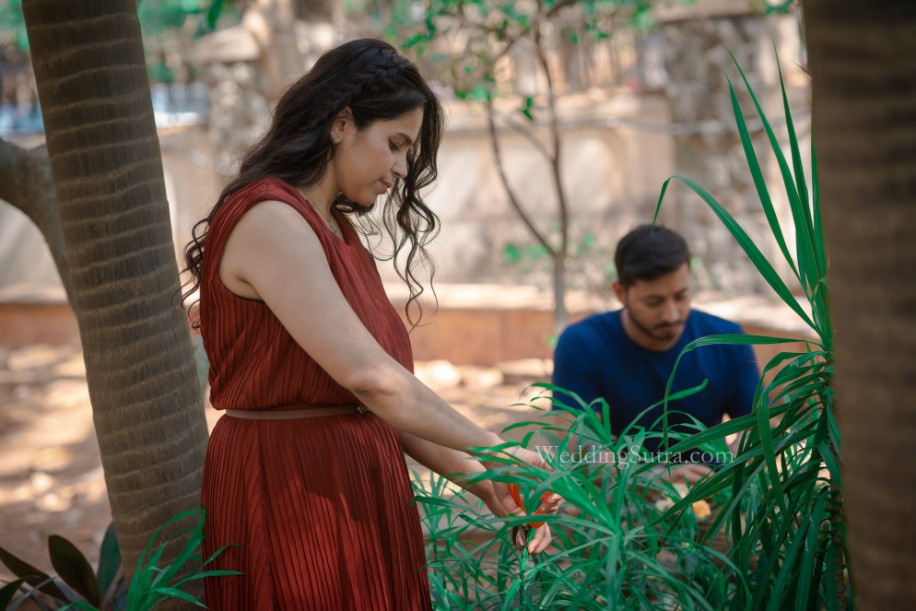 Engrossed in nature, as Madhushree turned away… … Kiran began to prepare what he was about to say. 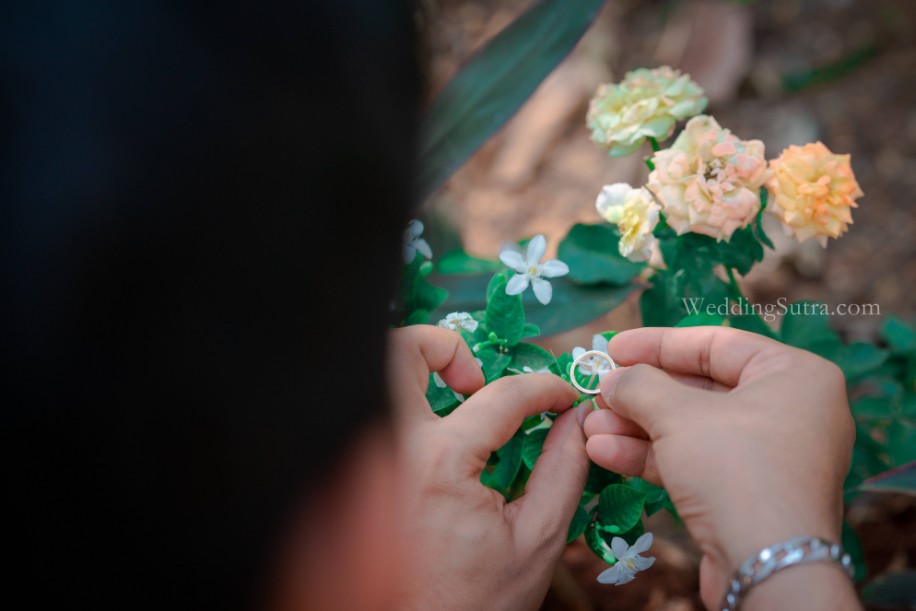 He snuck the Platinum Love Band in place right in time. 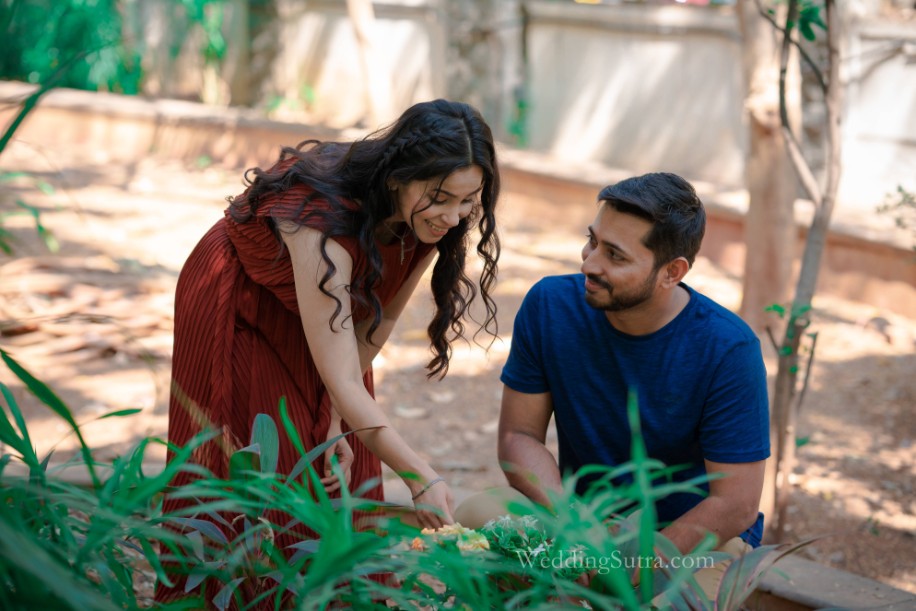 And called Madhushree over to create a moment that was truly sublime. 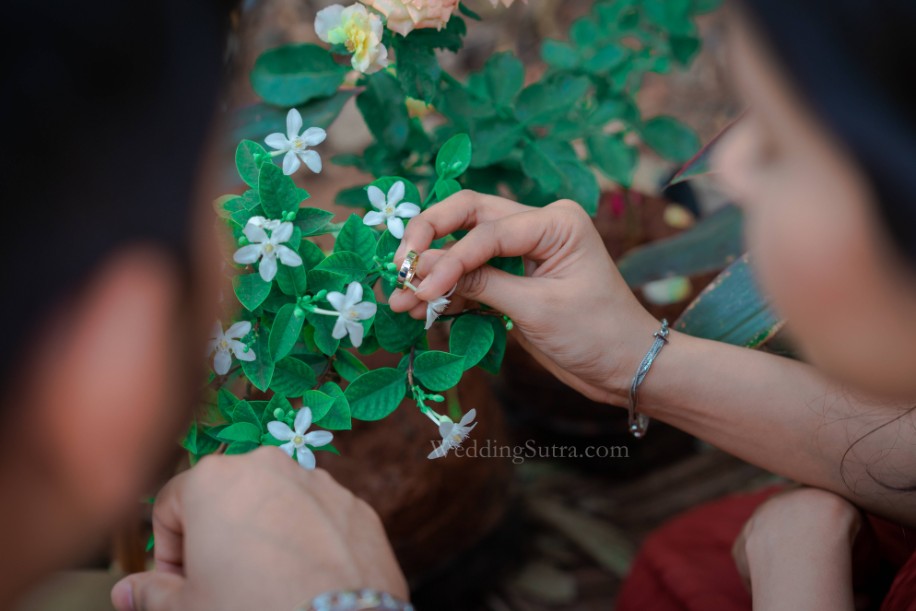 Madhushree: Hey! Is that a Platinum Love Band I see! Kiran: Yes, I just want to ask if you would marry me. Madhushree said a yes in a heartbeat. 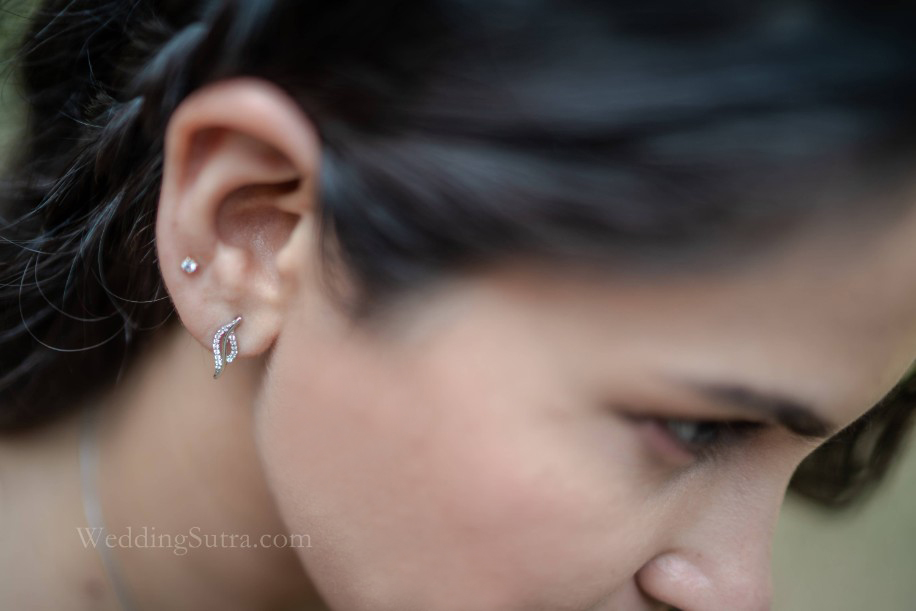 With that, he planted the Platinum ring on her finger.. 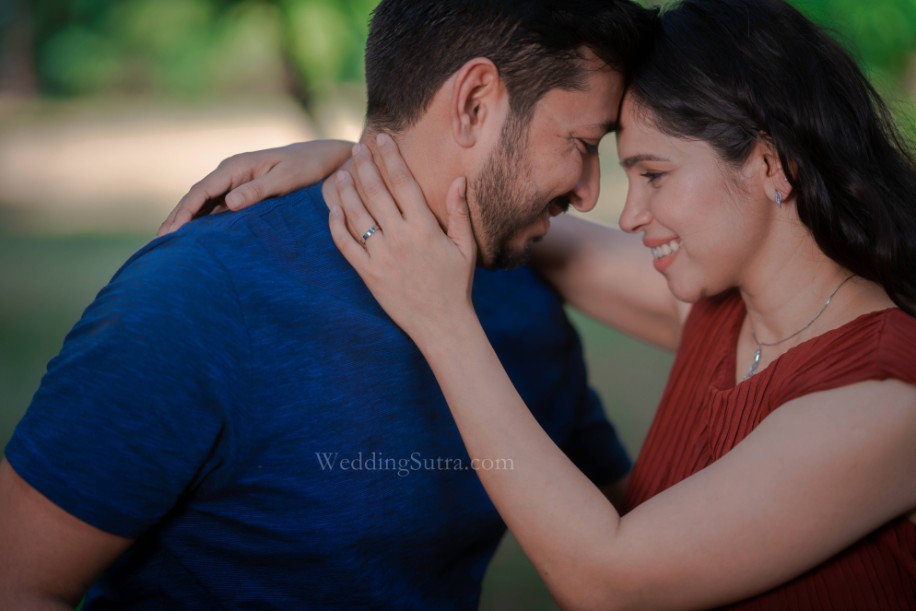 ..And promised to nurture their love so that it blossoms forever 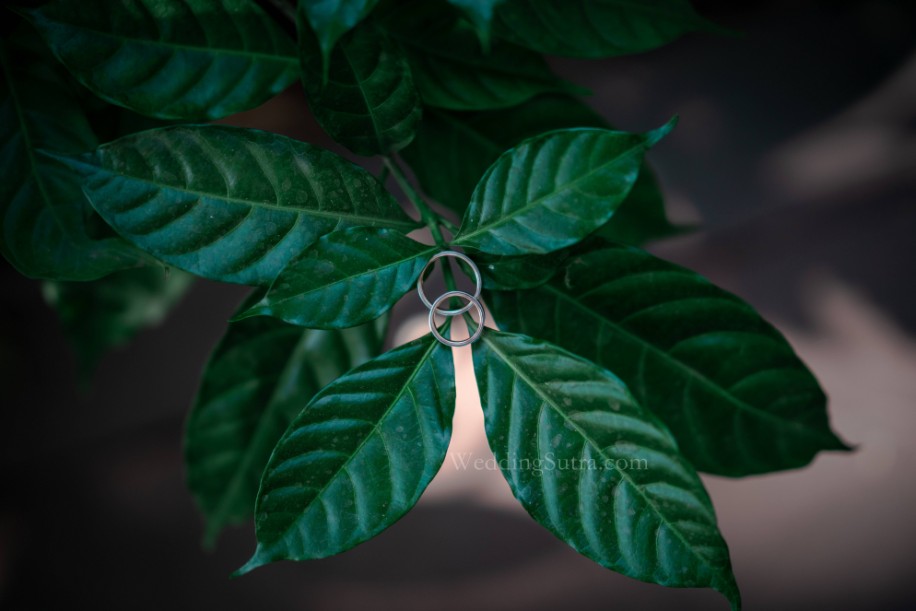 Along with Platinum Love Bands.. ..They laid the foundation of everlasting romance.

Madhushree and Kiran’s Platinum day of love was captured by Knotty Affair by Namit & Vipul. As they clicked beautiful images, makeup artist and hairstylist Hinal Dattani ensured the duo looked picture-perfect in every frame. Platinum jewellery from ORRA Jewellery added to the mood of the shoot and brought in a whole new nuance to the romance.

This entry was posted on Monday, November 26th, 2018 at 2:51:57 pm and is filed under Love Actually, Pre Wedding Photoshoots. You can follow any responses to this entry through the RSS 2.0 feed. Both comments and pings are currently closed.