A Pre-wedding shoot rooted in traditions by Hitched & Clicked

US-based Nitya wanted her pre-wedding shoot to reflect some of the essence of Indian traditions, art and culture which she is so fond of. She shares her experience and inspiration behind her pre-wedding photoshoot with fiance Puneet in Udaipur, Rajasthan. 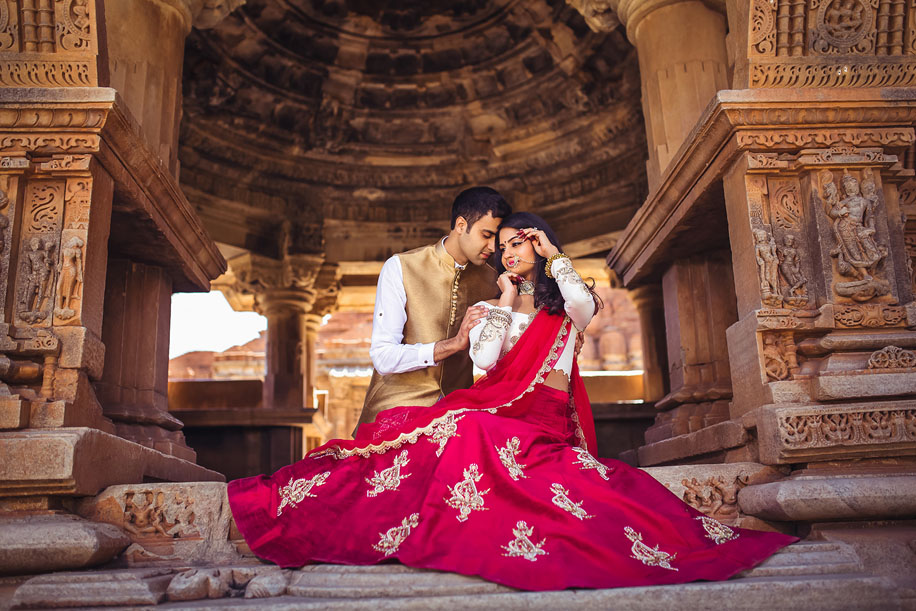 How We Met
Nitya, grew up in a small town in Alabama in the US, and works in New York as a senior marketing manager for a marketing firm. Puneet was born in Antwerp, Belgium, and later moved to New York. He works in his family’s wholesale diamond business, Vishinda, in New York City.

Nitya and Puneet met thanks to a mutual friend’s birthday party in New York. She was planning to move to Boston for work after graduating from New York University, which sparked a conversation with Puneet as he had attended college in Boston and knew the city well. He vowed to visit and show her around the city – and the rest is history! 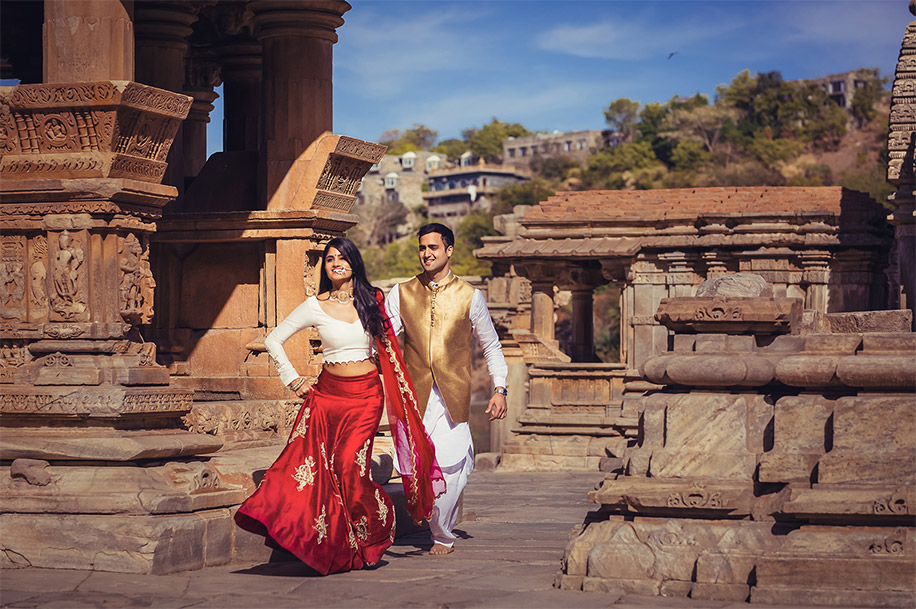 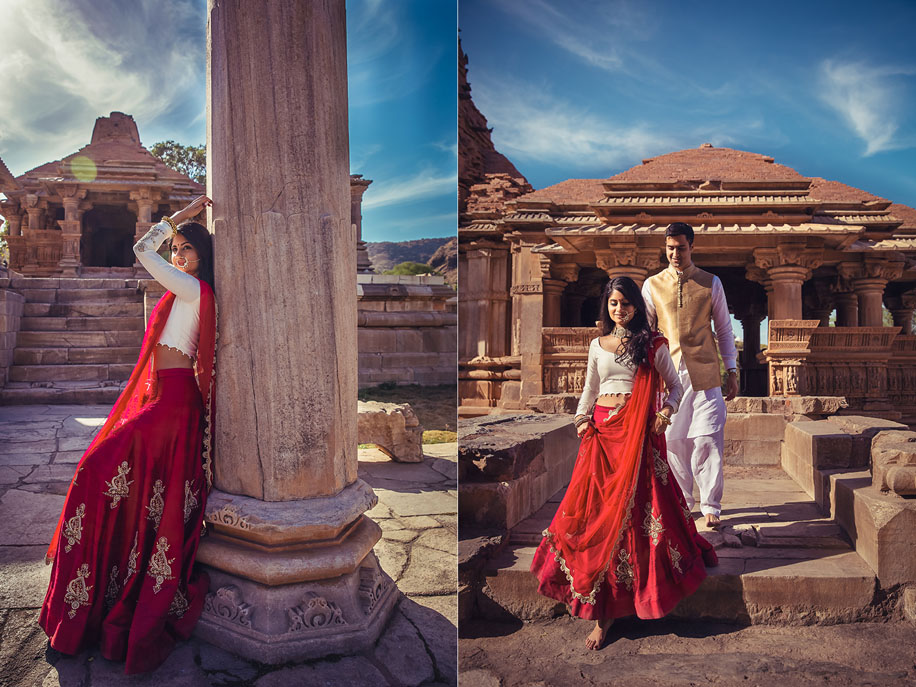 The Proposal
“Puneet popped the question at one of our favorite vineyards in the Hamptons, Wölffer Estate. We had already been there before with friends so Puneet suggested we go alone this time on a beautiful, sunny Saturday in August. While we were finding somewhere to sit, Puneet stopped a random gentleman standing nearby and asked him to take our picture – thinking nothing of it, I obliged. After taking a few pictures on Puneet’s SLR, the man asked if he could take a few on his high-end camera as well, adding that he could email the snaps to us. I would soon realize that he was actually a pro photographer Puneet had hired to capture the entire proposal! Puneet had even worked out a signal – he bent down like he was going to tie his shoes (they were already tied) and then proceeded to ask me if I would marry him.” Pre-Wedding Shoot
“Though I grew up outside of India, my upbringing has instilled pride and passion for our Indian heritage – especially its art. Some of my favorite childhood memories involve Indian art – dancing through four-hour Bharatnatyam classes, collecting every Bollywood cassette tape possible, listening to live carnatic music during Margali Masam in Chennai, visiting our ancestral sites at Mahabalipuram and Nuggehalli – these experiences always transported me to a different place and time, to a faraway yet familiar dream. I wanted our pre-wedding shoot to capture that timeless dream that is traditional India, its classical arts and architecture – and return to a time more simple, spiritual and serene and this 10th-century temple in Udaipur was just perfect.” 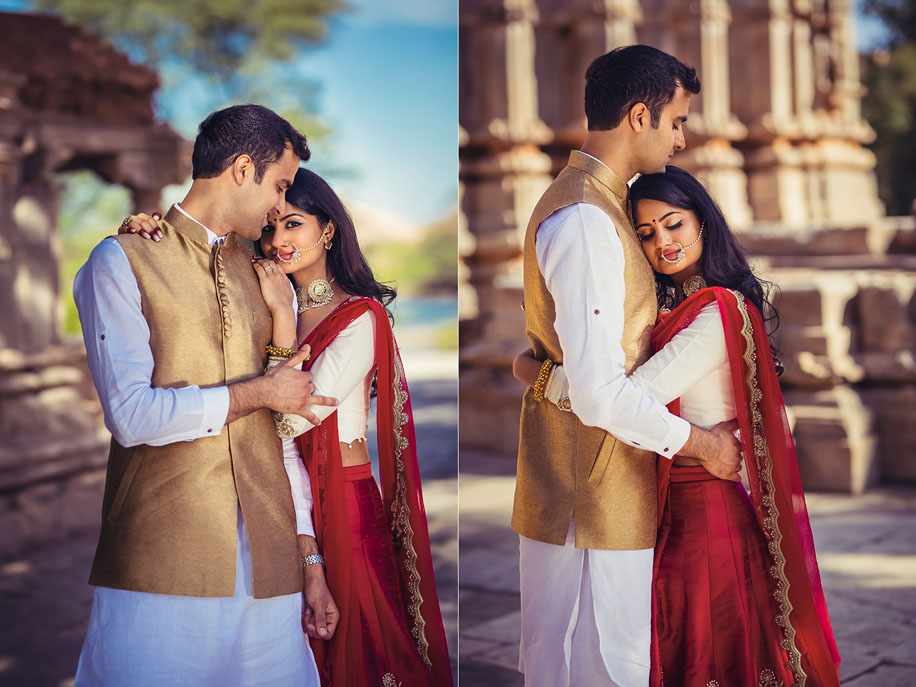 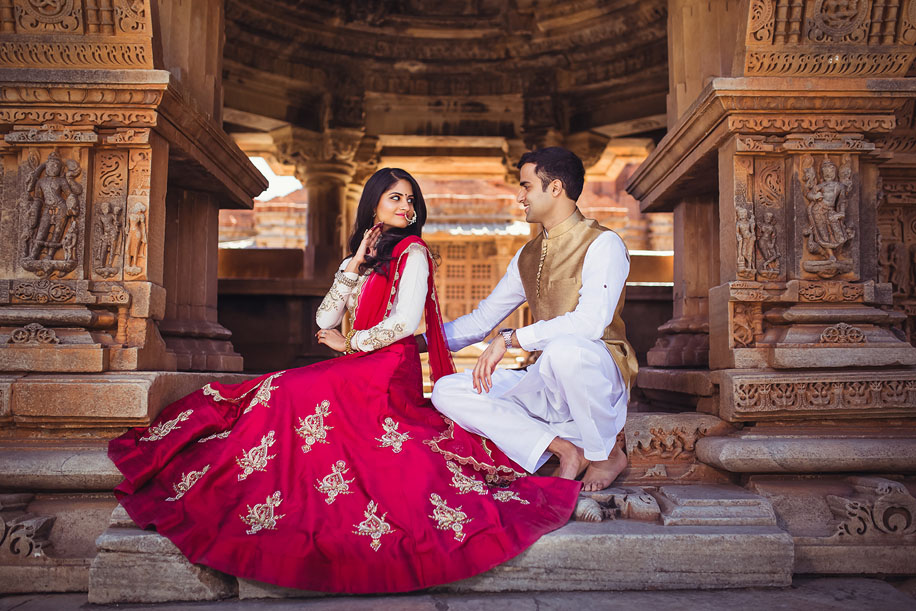 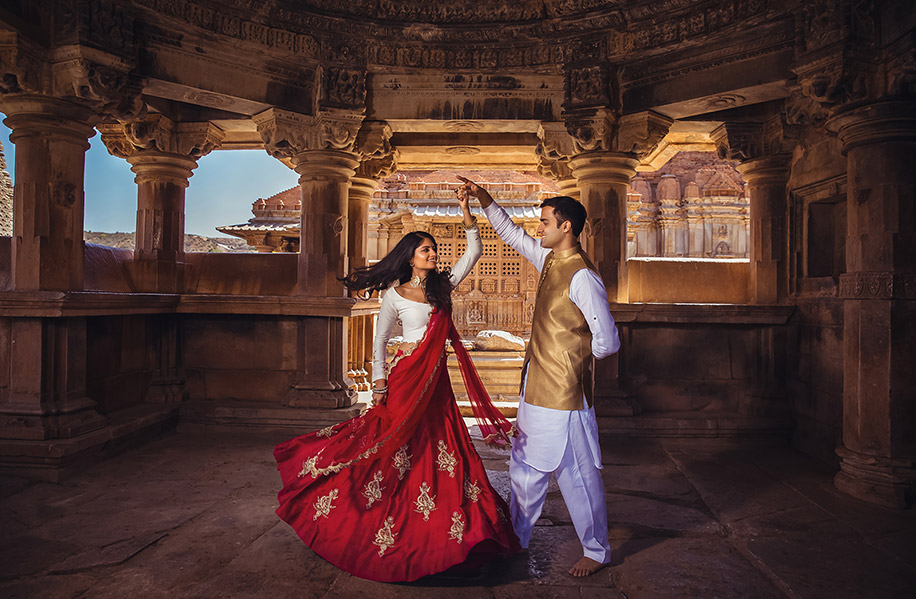 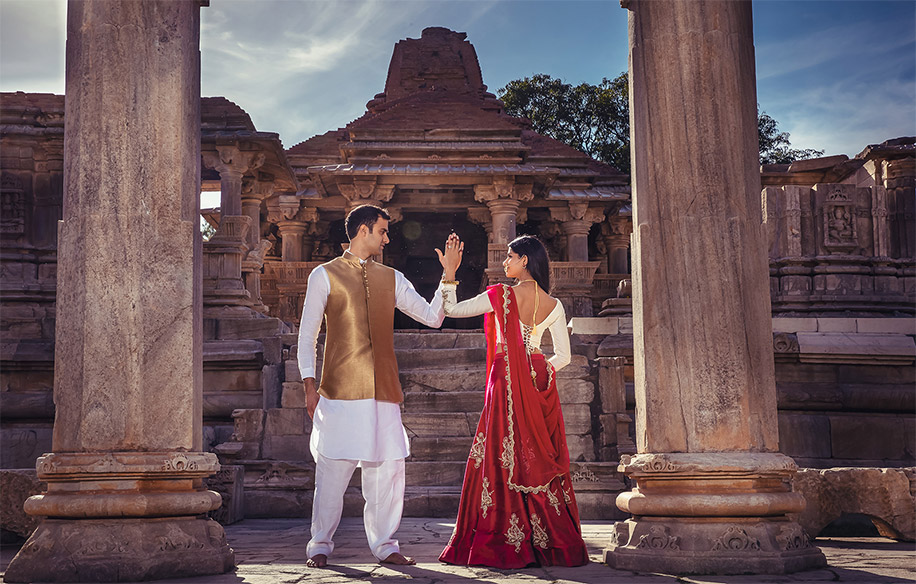 Theme
“Our concept for the shoot was traditional yet playful – a cinematic blend of the songs ‘Aankhon Ki Gustakhiyaan’ from the movie Hum Dil De Chuke Sanam, ‘Taal Pe Jab’ from the movie Refugee, and Sabyasachi’s campaign videos.” 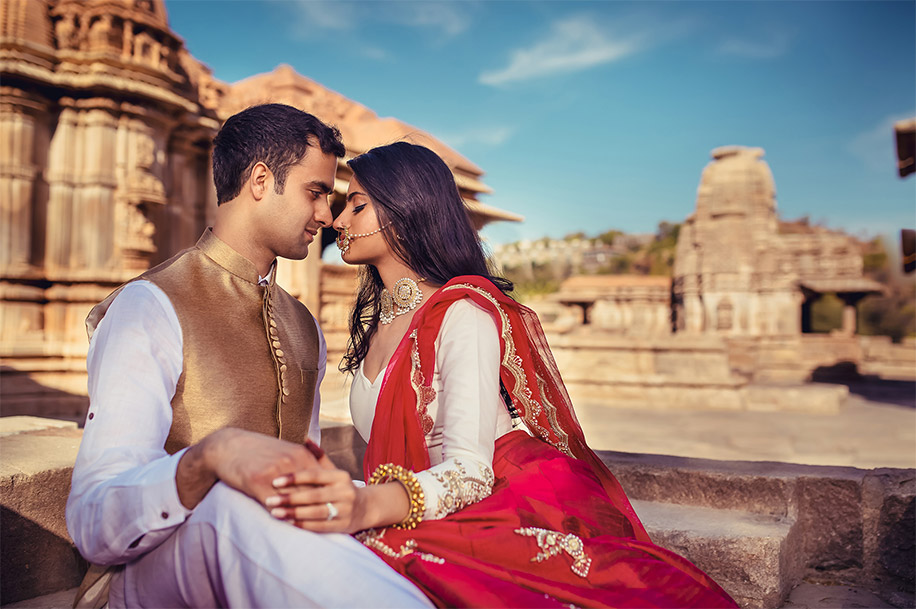 Styling
“My fiance’s relative is a very talented designer in Mumbai named Kyra Chhabria. I worked with her via Whatsapp to design my shoot lehenga and she turned it around so quickly and beautifully. My jewellery was a combination of family pieces and stunning statement items from Innaya Heritage Jewelry. Puneet’s outfit was figured out in one day in Mumbai (guys have it so easy!), just a few days before we headed to Udaipur.” 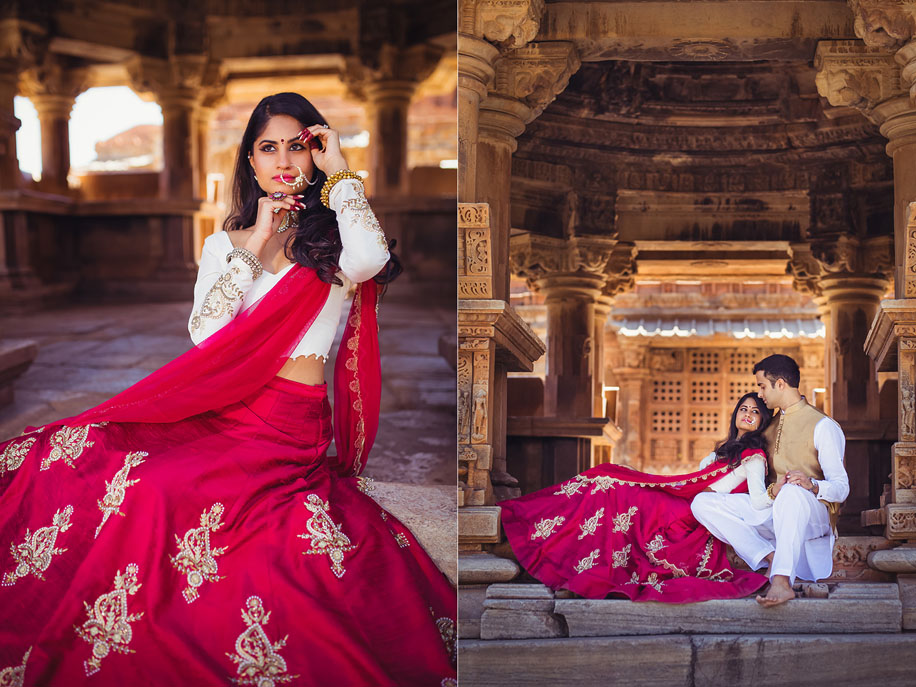 Hair & Makeup
“The most challenging part of the shoot was locating a reliable hair & makeup Artist in Udaipur. We ended up booking a stylist from a local salon. The makeup artist ended up showing up late, which set us back for the photoshoot and made things a little tense. Thankfully the photographers handled the delay and the time constraint well, and made the best use of the limited time we had together for the shoot.”

“We visited the temple for the first time just a day before the shoot. We had only seen pictures of the temple, so witnessing how picturesque and peaceful it was in person was really breathtaking (and a big relief!). Our parents accompanied us on this site visit, too, making it that much more special.”

“We also got very lucky with the weather and crowd on the day of the photoshoot. It was a clear, bright and sunny weekday, which made the experience that much more relaxing and intimate.”

“We haven’t finalized our wedding date yet. We’re hoping to confirm a venue in Udaipur soon, but it’s proving to be an arduous process, especially with the time difference. If Udaipur doesn’t work out, we’ll have the wedding in the US.” Experience with Hitched and Clicked
“I was referred to Hitched & Clicked by a close friend who recently used them for her wedding events last year in Delhi and Jaipur. Aastha and I spoke over the phone for maybe 20 minutes and that’s really all it took. This talented duo just gets it, and they do all they can to see your vision through.”

“It worked out really well as they were already scheduled to be in Udaipur doing a wedding and extended their trip to do our shoot. They must’ve been exhausted after a three-day wedding, but you couldn’t tell! On the day of our shoot, they arrived early and completely immersed themselves in their work throughout. Their team shot the photos and video within just a few hours. The stars really aligned for us, and I’m so glad they did!” 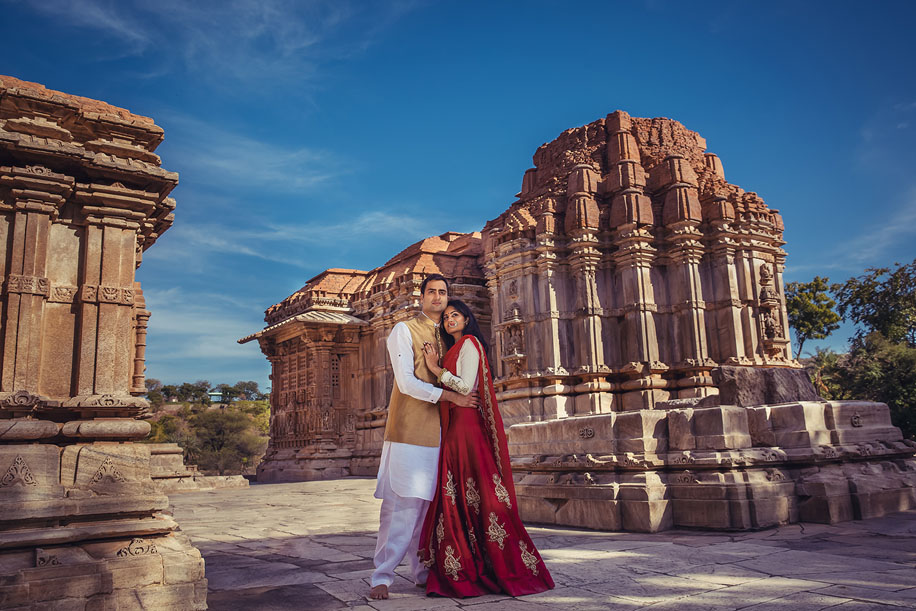 To book Hitched and Clicked for your Pre-Wedding shoot click here.

To check out our favorite pre wedding photoshoots click here.

For more Pre Wedding Theme Inspirations, please check our Facebook Album, Or choose from a list of the best wedding photographers from WeddingSutra Favorites and our Photographer’s Showcase section.

This entry was posted on Wednesday, April 12th, 2017 at 3:54:43 pm and is filed under Pre Wedding Photoshoots. You can follow any responses to this entry through the RSS 2.0 feed. Both comments and pings are currently closed.