A Surprise Airplane Hangar Proposal At This Planned Pre-Wedding Photoshoot!

A lavish pre-wedding photoshoot turned into the most idyllic surprise proposal for the bride-to-be.

Akanksha and Karan planned a pre-wedding photoshoot in Toronto’s Airplane Hangar. This unconventional place was transformed into a fairytale-like setting for their shoot. From vintage cars and private jets, to a live romantic musical performance, this couple’s photoshoot is one to go down in the books of grandeur! 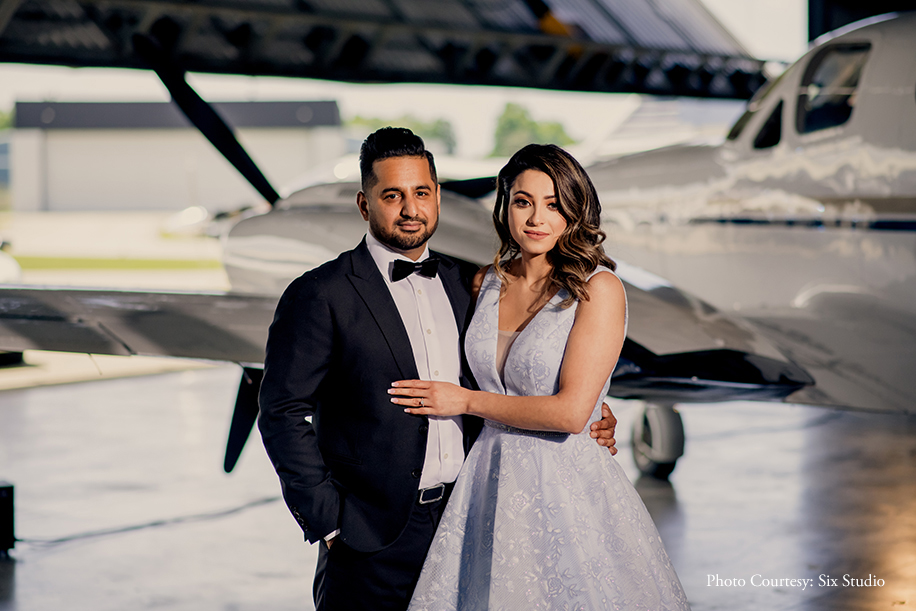 How they met
Akanksha and Karan met at the Suhaag Wedding show in Toronto and instantly connected. Well, thanks to social media, they stayed in touch and decided on meeting again soon. After weeks of chatting and meeting just as friends, Karan finally asked Akanksha on an official date. They both slowly realized that they had a lot in common, and sparks began to fly.
Their love naturally blossomed, following which, they soon got engaged. The Proposal
While Akanksha glammed up for the photoshoot, Karan waited for her with a breathtaking surprise at the venue. As she walked in, Karan emerged out of a private jet and got down on one knee to propose to her. The proposal resembled a romantic Bollywood film complete with a live musical performance by Manj Musik singing romantic songs in the background. Pre-Wedding Shoot
The photoshoot for this couple was filled with grace and panache. They posed against the backdrop of vintage cars and private jets while their stunning outfits complimented each other. Akanksha looked regal in an elegant green gown with a low-neckline for the shoot, while Karan donned a dapper black & white tux with a floral printed suit. A romantic mood was set by the voice of Manj Musik in the background as the couple grooved to the tunes.
The emotions of the couple were beautifully captured by Six Studio Photography. This entry was posted on Thursday, March 5th, 2020 at 12:49:13 pm and is filed under Pre Wedding Photoshoots, Wedding Proposals. You can follow any responses to this entry through the RSS 2.0 feed. Both comments and pings are currently closed.