Krabi, Thailand has a cult following with travelers around the world. Home to some of the most spectacular beaches on the planet, those who arrive seeking the picture-perfect views they’ve seen don’t leave disappointed.

Nandini and Ajay were dreaming of Krabi. Every aspect of it made these lovebirds swoon and they planned a pre-wedding shoot in paradise; even if it was after the wedding. WeddingSutra Favorites, Twogether Studios captured their love and here the couple shares highlights from the shoot. How we met
“We got to know each other when we worked at Google in India,” Nandini says. The couple had a lot of friends in common but only began really chatting in 2015 when they were both moving to the States. “He was going to Google at the Mountain View campus at the headquarters. I was moving to New York to study fashion marketing at Parsons.” Trading notes about visa applications and other nitty-gritty, they ended up talking every day. “He moved a few months before me, so by the time I got there, he was my first phone call for anything,” Nandini says. Their relationship just grew from there and soon they were talking for hours on end every day.

The Proposal
It was on a warm spring day that Ajay suggested that they do a potluck brunch with their friends. Nandini didn’t think too much of it, “It was a very normal suggestion and our friends brought something and soon we were eating and there were a fair amount of mimosas. After some time everyone just suddenly went like, ‘Oh, we need to go to the rooftop!’ I was a little reluctant because the rooftop in his building was getting renovated and it wasn’t open yet,” she says.

So the band of buddies decided to cross the street to Nandini’s building and go to that rooftop instead. Nandini says, “Everyone seemed really adamant so we took everything to the roof on my building across the street. At one point I was trying to get a shot from this camera of the Empire State Building because you could see it from my building. When I turned back, Ajay was on his knees! It was really surprising because I did not see that coming! I think he pulled it off brilliantly. We had some of our closest friends there, and he had already asked Mom and Dad and they also knew.”

Pre-Wedding Shoot
The couple moved out of the States. Nandini came back home and Ajay was working in Singapore. “His job was very demanding,” she remembers, “ so we put off the idea of a pre-wedding shoot for a while.”

The next thing they knew, they were married and there was no scope of having a pre-wedding shoot done. But Nandini says, things changed, “Things settled for him for a while. We were going to Krabi and thought it’s such a beautiful location. We wanted to chill a little bit, get the shoot done and luckily it worked out with Arjun and Praerna of ‘Twogether Studios’ as well.” 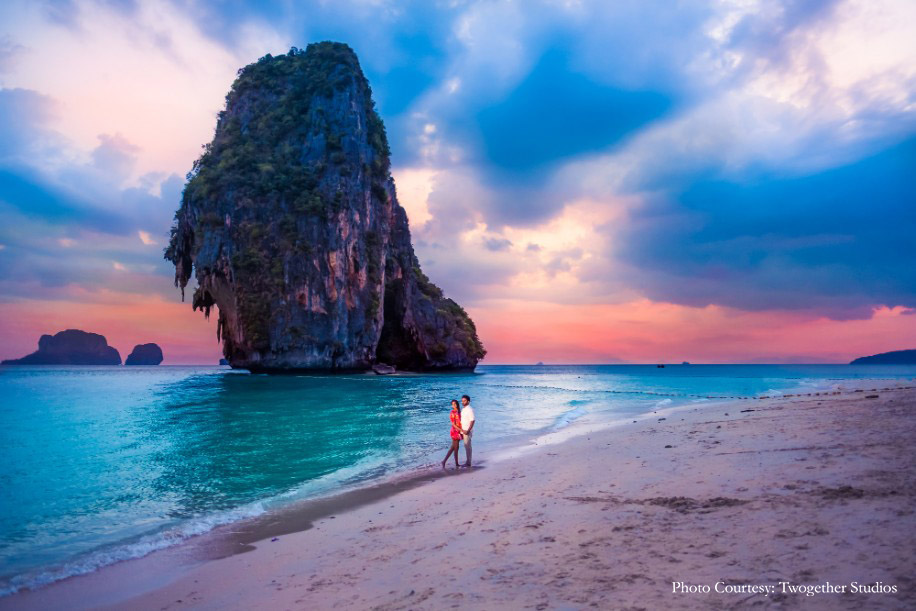 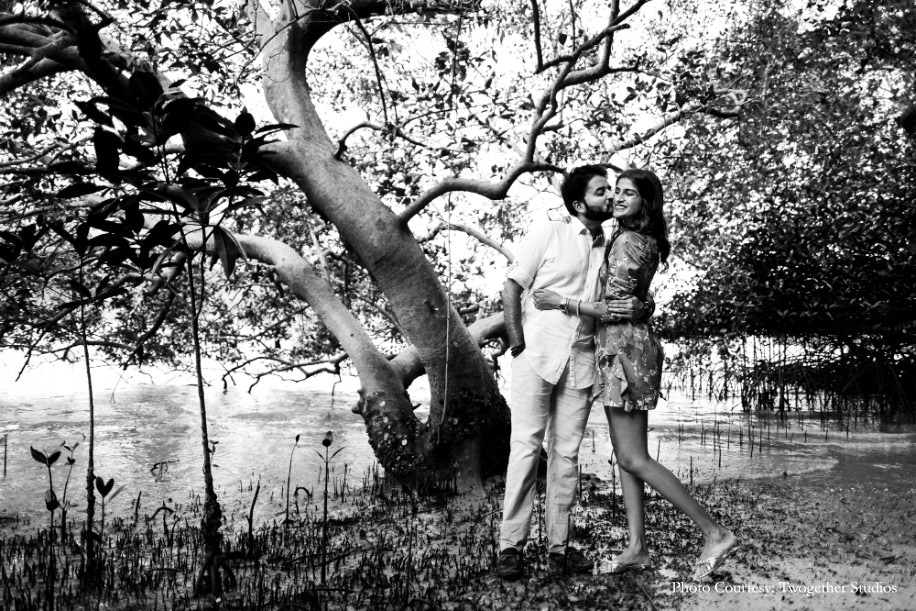 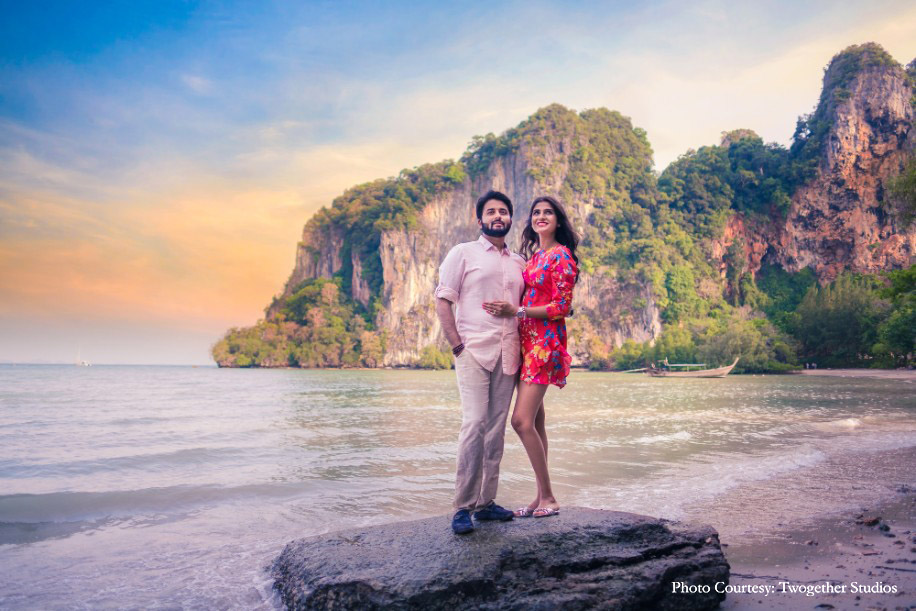 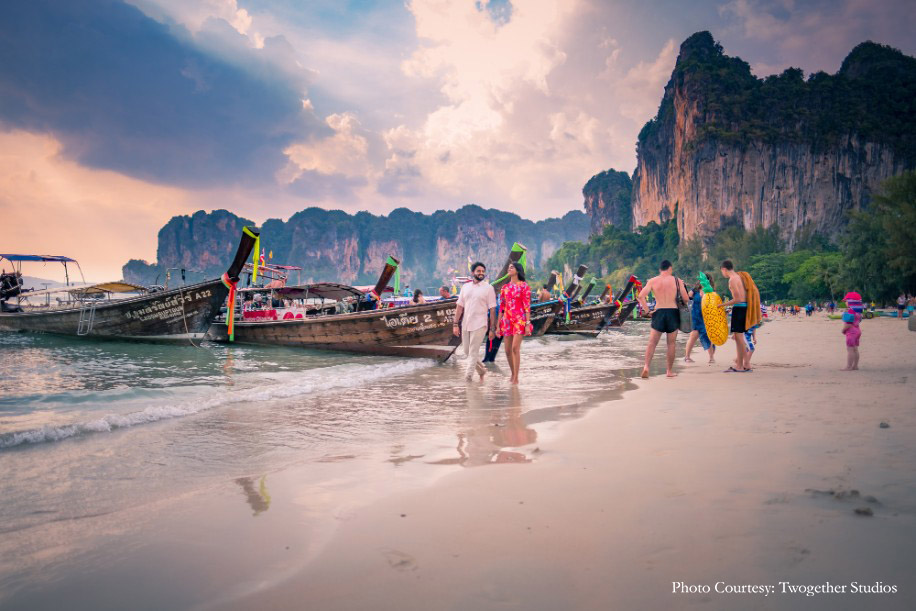 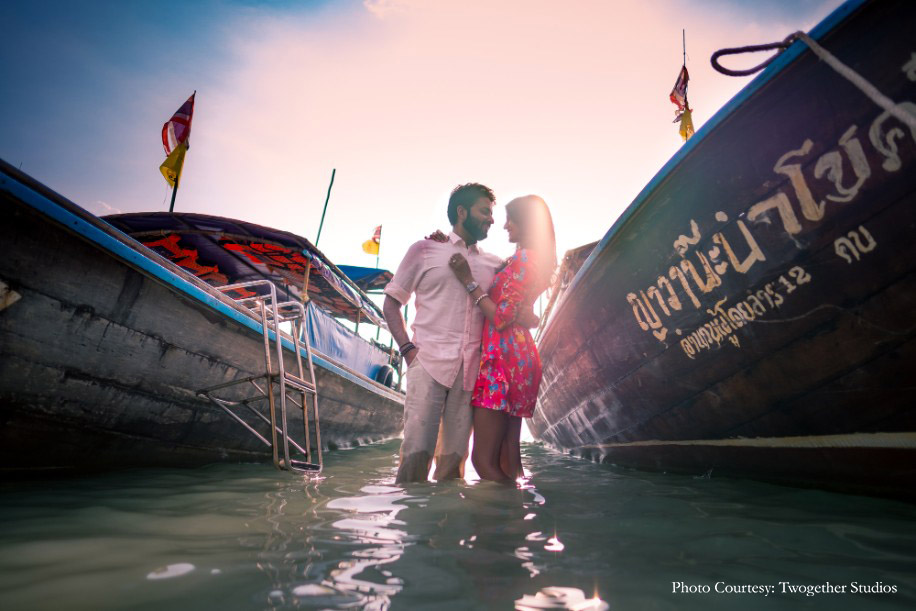 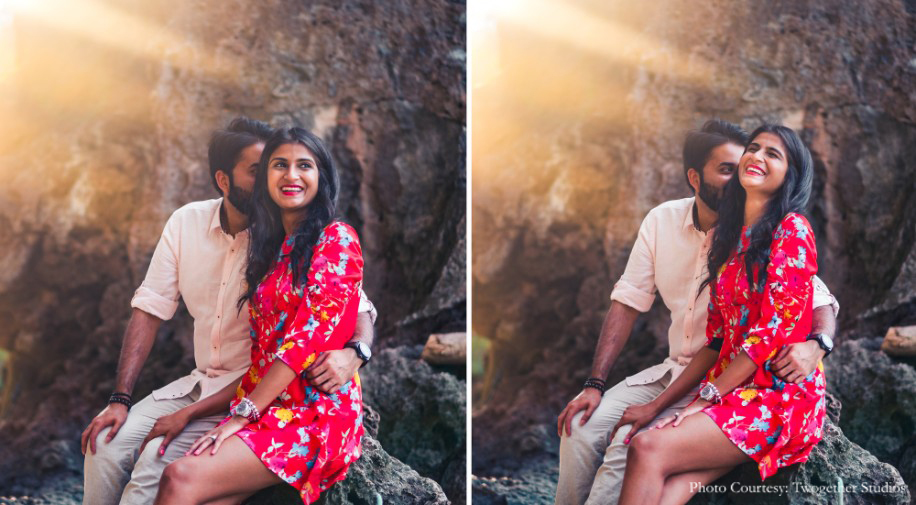 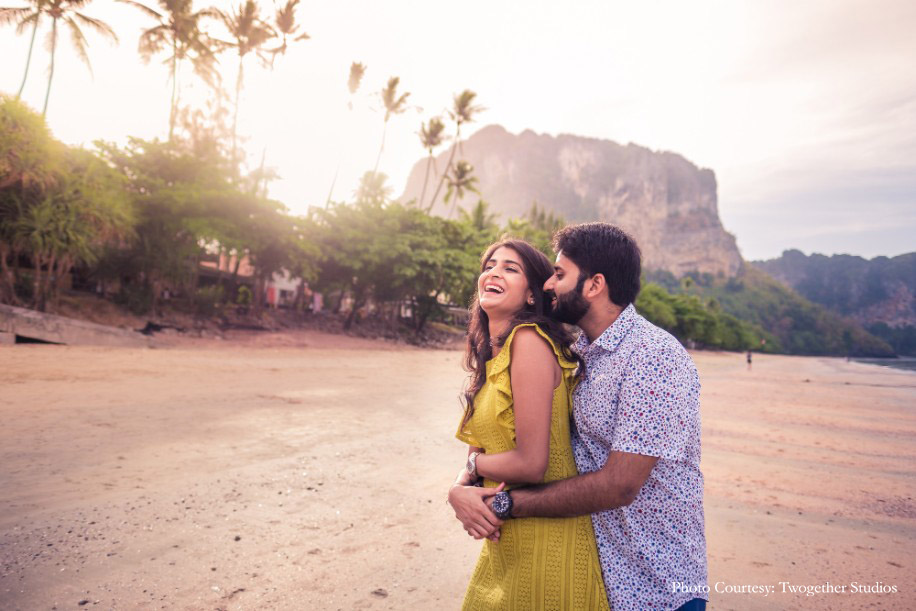 The couple shot around Krabi, on the beach close to the resort and at the Emerald Pool, an hour and fifteen minutes away. They had the time of their lives, Nandini says, “I think in a way all the shoots were really fun especially because Arjun and Praerna give you so much time, as a couple. Everyone on the team is super nice and we could have conversations with them. So that’s the thing I enjoyed the most. With Arjun and Praerna it was so candid. I think they really invest their time in understanding the couple. It was a fun experience. We really did have a good time.”

This entry was posted on Monday, May 14th, 2018 at 11:32:18 am and is filed under Pre Wedding Photoshoots. You can follow any responses to this entry through the RSS 2.0 feed. Both comments and pings are currently closed.