This Photoshoot Explores some of New York’s Most Romantic Spots!

Romance may not be one of the top things that come to mind at the first mention of New York, but the city throws up many options for couples in love. Manasi and Alex will vouch for that!

Manasi and Alex who decided to have a pre-wedding shoot in the Big Apple closed on three gorgeous locations, each with a deep significance to their love story. Captured by WeddingSutra Favorite – Shooting Stars, their pictures are a testament of their strong bond and chemistry. How We Met
Alex and Manasi both met on the little island of Grenada in the West Indies where they attended medical school. They ended up sitting next to each other on the first day of class (Alex raced his friend to get this seat – he’ll deny it, but it’s true!) and those were their permanent seats for the rest of the semester. Sometime between the long, grueling days of studying and the post-exam celebrations on the beach, they became best friends. They have since graduated from medical school and started their residencies. Manasi is a first-year pediatric resident in Staten Island, NY, and Alex is a first-year emergency medicine resident in Brandon, FL. The Proposal
Alex planned a jam-packed day of events. They started with a mani-pedi for Manasi, and brunch at their favorite little spot in Forest Hills, NY (also where Alex brought Manasi’s mom to ask her for her blessing a few weeks earlier). They went ice-skating at Rockefeller Center, watched ‘The Lion King’ at Broadway and then went for a stroll in Central Park. As if that wasn’t enough for one day, Alex led Manasi to the top of a large rock, overlooking the park. When they reached the top, there was a picnic blanket laid out with a bouquet of roses, scattered rose petals and a bottle of champagne. That’s when he got down on one knee and popped the question! It was the perfect backdrop for a perfect proposal. Moments later and to Manasi’s surprise, their families and friends joined the celebration atop the rock. The night ended with dinner at Times Square with their closest loved ones, and it was a night they will never forget! Pre-Wedding Shoot
Before they began planning the shoot, Deepesh met with Alex and Manasi for coffee so that he could get to know their personalities. He threw out some ideas for locations and backdrops which he felt would suit them best after learning their story. They worked together to write up a timeline and executed it flawlessly with the help of Deepesh’s expertise. This was Manasi and Alex’s first photoshoot and they were quite nervous at the start. Manasi shares, “We had no idea what we were getting into or where to even start. However, once we met with Deepesh, he made us feel comfortable from the get-go. He made an effort to get to know our personalities and our story. He wanted to bring that out in our pictures. After throwing around ideas with him, he created a Pinterest board for us including some of the shots he wanted to try with us. He wanted to take us out of our comfort zone because he had a vision and we went with it!” They ended up picking three separate locations including three different outfit changes. “The locations we closed on were Rockaway Beach which was a nod to the beginning of our relationship in the Caribbean, Central Park — where we got engaged, and the Brooklyn Bridge Promenade which is one of our favorite date spots,” Manasi explains. They went with fresh and neutral colors for the beach, a fun casual look with pops of color for Central Park and a formal look for the Brooklyn location. 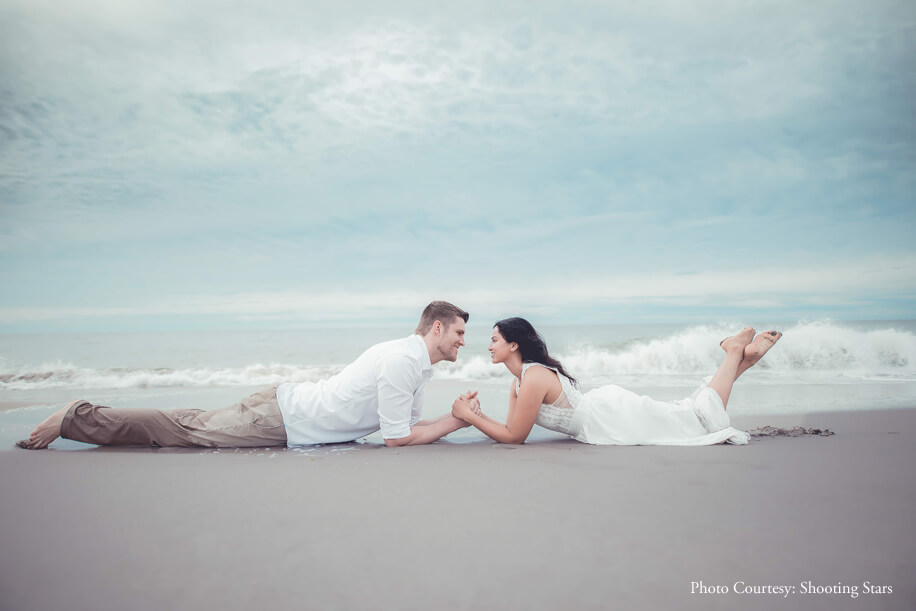 The shoot went on for 13-hours and Manasi was all praises for the Shooting Stars team by the end of it. She said, “Deepesh was so incredibly patient with us, and the shots came out way better than we could have imagined! Shooting Stars made sure that the shoot was a breeze. We were both so nervous and felt so awkward at times. However, Deepesh gave us the perfect amount of direction for our pictures so that they turned out looking as natural as possible. We are so happy to have found Shooting Stars, and we cannot wait to see the beautiful moments that are captured on our big day!” Before signing off, Manasi was quick to pick out the memorable part of the day. “The entire experience was a blast, but the beach shoot was our favorite. We arrived at the beach around 8 a.m., and it was hardly beach weather. In the cool hours of the morning, Deepesh directed us to take some different shots, working our way closer and closer towards the water. Little did we know, he had planned some final shots with us laying in the freezing water – we were game! We were drenched and covered in sand by the end of it, but the pictures came out amazing. It was well worth it, and it gave us a whole new appreciation for beach/swimsuit models!” This entry was posted on Tuesday, February 12th, 2019 at 12:45:35 pm and is filed under Pre Wedding Photoshoots. You can follow any responses to this entry through the RSS 2.0 feed. Both comments and pings are currently closed.